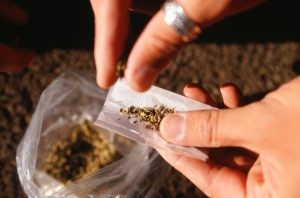 Daily use of marijuana rose as well from less than two percent to four percent.

Lead study author Dr. Wilson Compton said, “This increase has corresponded with the legal and social acceptance of marijuana, and so it is not such a surprise.”

Over the past 20 years, medical marijuana has been legalized in 25 states and the District of Columbia. On the other hand, marijuana’s potency has increased, too,  and so more research is needed to assess the effects and potential harm of the stronger pot.

Dr. Compton added, “We need to think about how to do appropriate prevention messaging to make sure people aren’t putting themselves at risk for becoming dependent and other problems associated with the drug. [Difficulties could include] difficulty with their work performance and with their ability to think clearly and function.”
Although usage is on the rise, dependency and abuse are actually on the decline.

As marijuana legalization is fairly recent, it’s important to monitor its effects on health in the long term. So far, studies have been limited or short term.

Legalizing marijuana may have been the best defense against marijuana abuse.