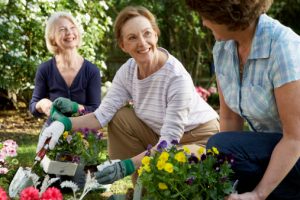 Any form of physical activity – dancing, gardening, cleaning – has been shown to help cut a person’s risk of Alzheimer’s disease. The researchers found the reduction in Alzheimer’s disease risk may be lowered by up to 50 percent.

The researchers analyzed lifestyle habits of 876 seniors and conducted brain scans to determine if movement helped the brain. They found that any form of physical activity can help increase gray matter, which is believed to help lower the risk of Alzheimer’s disease and other forms of dementia.

Lead researcher, Dr. Cyrus Raji said, “Any type of physical activity that burns calories – from jogging to gardening to walking to dancing – is associated with more gray matter in the brain. The most important thing is that it’s regular.”
The researchers suggest that the more gray matter a person has, the healthier their brain is, which means these individuals will have a lower risk of developing dementia.

James Hendrix, director of global science initiatives at the Alzheimer’s Association, added, “What’s good for your heart is good for your brain, which includes exercise. Exercise should be part of your lifestyle.”

Hendrix suggests that individuals are not fearful of dying from a heart attack, so they don’t partake in exercise. But, perhaps, individuals are more fearful of losing their memory and thinking abilities, and that may provoke them more to get active – in any form.

Dr. Raji and his team collected data on 876 participants who were part of a cardiovascular health study. At age 78, the participants underwent MRIs to measure the size of their brains and answered questions about their memory and physical activity.

Estimating weekly calorie expenditure, the researchers found that the more physical activity a person partook in, the larger the areas of the brain for memory and thinking were.

Along with lowering the risk of Alzheimer’s disease by nearly 50 percent, the researchers also found that regular physical activity also helped those who already had mild cognitive impairment (MCI).

Dr. Raji concluded, “If you are going to do a physical activity to reduce your risk for Alzheimer’s disease, do the activity that you most enjoy, that you feel the most comfortable doing, because that’s the activity you are most likely to sustain throughout your life.”