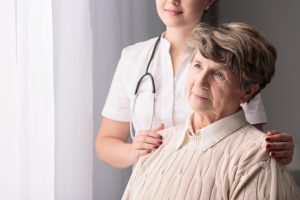 Lead researcher Keith Laws said, “Unlike mental decline associated with normal aging, something about Alzheimer’s specifically disadvantages women. There has been some previous, but limited, evidence that females with Alzheimer’s deteriorate faster than males in the earlier stages of the disease. And possible explanations are for a hormonal influence, possibly due to estrogen loss in women or, perhaps, a greater cognitive reserve in males which provides protection against the disease process. But further studies to examine sex differences with the disease are needed to provide greater clarity on these issues.”

Additional analysis revealed that age, education, and dementia severity did not explain the disadvantage that women have, compared to men.

The study included 254 Alzheimer’s disease patients, 672 people with mild cognitive impairments (MCI), and 390 without any memory or thinking problems.

Saundermann added, “These results suggest that women are better able to compensate for underlying changes in the brain with their ‘cognitive reserve’ until the disease reaches a more advanced stage.”

The immediate recall test has a maximum score of 75, and memory is considered impaired with a score of 37 or less. Women reached impaired memory scores quicker than men at a lower glucose metabolism.

Saundermann explained, “If these results are confirmed, adjusting memory tests to account for the differences between men and women may help diagnose Alzheimer’s disease earlier in women.”

If the study findings are confirmed, testing for women and men has to be differentiated in order to properly diagnose Alzheimer’s disease.

Mary Sano wrote in an accompanying editorial, “At a public policy level, the potential healthcare cost for under-detection or delayed diagnosis of women with Alzheimer’s disease or its early stages is staggering and should motivate funding in this area.”