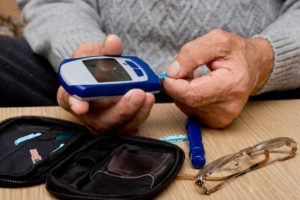 New information for those concerned about Alzheimer’s disease shows that blood vessels may be the key to brain health in old age. University of Southern California researchers suspect that the best shot at Alzheimer’s prevention could be maintaining cardiovascular health through exercise and diet.

This study shows that damaged capillaries in the brain may lay the groundwork for Alzheimer’s decades before signs of memory problems arise. It had been previously thought that plaque and tangles of abnormal proteins were the reason for cognitive impairment.

Berislav Zlokovic, director of the Zilkha Neurogenetic Institute at the Keck School of Medicine of USC, spoke about the findings of the study: “The fact that we’re seeing the blood vessels leaking, independent of tau and independent of amyloid, when people have cognitive impairment on a mild level, suggests it could be a totally separate process or a very early process.”

Scientists have found that in healthy brains, the cells that form the walls of the capillaries fit together to form a barrier that keeps unhealthy substances from reaching the brain such as stray cells, metals, and pathogens. This is called the blood-brain barrier. The problem in aging brains is that the seams between the cells can become loose, which will, in turn, lead to the blood vessels becoming permeable and neurons potentially dying.

“We’ve also learned that pericytes, a type of cell in the blood-brain barrier, not only help push blood through the brain but also secrete a substance that protects neurons,” Zlokovic said.

Arthur Toga, a world leader in mapping brain structure and functioning, who directs the USC Mary and Mark Stevens Neuroimaging and Informatics Institute at the Keck School of Medicine, spoke about the findings: “Brain imaging is integral to studying Alzheimer’s disease. In visualizing the blood-brain barrier in people, we actually can see and measure changes where the barrier breaks down. We’ve been able to correlate greater leakage with increased cognitive decline.”

Toga is using brain imaging in his own practice to detect changes in the spaces around blood vessels in the brain. Known as perivascular spaces, these areas help drain fluid and metabolic waste from the brain, but if changes appear in these spaces, it could potentially be indicative of disease.

Daniel Nation, an assistant professor of psychology at the USC Dornsife College of Letters, Arts, and Sciences has also studied the link between Alzheimer’s and blood vessels. He has found that patients with untreated diabetes developed signs of Alzheimer’s disease 1.6 times faster than people who did not have diabetes. His theory is that diabetes treatment may keep the brain’s blood vessels healthy, warding off dementia.

“It’s clear that the medicines for treating diabetes make a difference in the progression of dementia,” Nation said. “But it’s unclear how exactly those medications slow or prevent the onset of Alzheimer’s disease, so that is something we need to investigate.”

Cognitive decline is a widespread problem in the aging population and studies such as this offer an insight into prevention. What all research findings have in common is that diet and exercise and keeping on top of conditions such as diabetes and high blood pressure can lower the risk of cognitive decline by keeping blood vessels healthy.