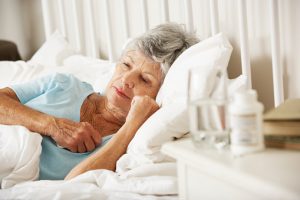 Sleep issues are common with seniors, and research suggests that not only does aging lead to sleep disruptions in seniors, but Alzheimer’s disease does, too.

Lack of sleep can become so overwhelming you might find that you can’t participate in normal activities. Safety becomes an issue – you may be dizzy, light-headed, or find yourself starting to nod off when you’re driving your car.

In people with Alzheimer’s disease, sleep troubles tend to be even more common, usually leading to confusion and wandering during the night.

There could be some hope for those having a tough time sleeping. A study by Beth Israel Deaconess Medical Center (BIDMC), Toronto’s Sunnybrook Health Sciences Centre, and the University of Toronto has revealed why sleep declines with age.

The study, published in the journal Brain, outlines how the loss of “inhibitory neurons” has led to a lack of sleep in laboratory animals.

These same types of neurons are dramatically diminished in seniors and people with Alzheimer’s disease. When these neurons are depleted, people often experience sleep disruption, according to researchers. The study examined the brains of 45 people who died at an average age of 89.

Senior researcher at BIDMC, Clifford Saper, told Science Daily, “Sleep loss and sleep fragmentation is associated with a number of health issues, including cognitive dysfunction, increased blood pressure and vascular disease, and a tendency to develop type 2 diabetes. It now appears that loss of these neurons may be contributing to these various disorders as people age.”

Saper says sleep quality starts to decline rapidly at around age 70 with a noticeable amount of sleep being lost: “On average, a person in his or her 70s has about one hour less sleep per night than a person in his 20s,” he says.


Seniors and sleep by the numbers

The prevalence of insomnia is much higher among older adults. According to the National Sleep Foundation’s 2003 Sleep in America poll, roughly 44 percent of seniors experience one or more of the symptoms of insomnia at least a few nights per week if not more. Insomnia is serious and it can cause long-term issues like fatigue, mood disturbances, and poor concentration. Insomnia can also be acute, lasting only a few days or weeks.

There is also a decrease in the deep-sleep stage and an increase in periods of wakefulness at night.

Those debilitating sleep disorders among seniors include apnea, which is the temporary cessation of breathing, and limb movement, which leads to periodic leg movements during sleep (PLMS) and restless leg syndrome. When this happens, the person feels the need to move his or her legs repeatedly before sleep, which prevents him or her from falling asleep altogether.

Improving your sleep protects your health

There are some aspects of getting older that are inevitable, so it comes down to how we manage the challenges. Changes to our sleep patterns are a part of the normal aging process. But remember, it’s far better to understand how these sleep patterns change with age and consider the simple changes that can be made to improve the quality of sleep.

You can start by talking to your spouse or attendant about sleeping habits you may not be aware of. There could be a really good reason for lack of sleep that might be easy to fix.

You may be waking up during the night because you drink coffee or caffeinated tea after dinner and the caffeine acts as a stimulant. Or perhaps you’re falling asleep in front of the television, instead of winding down your day quietly in bed. Preparing your mind and body for sleep and creating a peaceful environment in your bedroom are important steps.

If your sleep troubles are chronic, speak to your doctor. The benefits to your long-term health will make it worthwhile.