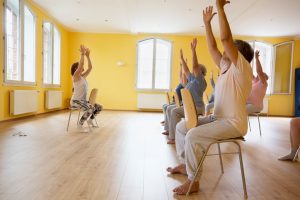 Successful aging has been defined in many different ways by researchers, but many can agree that it comprises more than just good health. The most accepted definition includes not suffering from chronic diseases or physical disabilities and having optimal social engagement and mental health. Some researchers believe that classifying successful aging in this multi-dimensional way is more beneficial for aging individuals than a one-dimensional focus on identifying risk factors for chronic illness or disability.

Research has proven that physical activity can decrease the risk of a number of chronic illnesses and disabilities. The relationship between physical activity and successful aging as a multi-dimensional approach has yet to be examined as thoroughly. In a new study, the researchers write, “A clear understanding of the associations between behavioral determinants, such as physical activity, and successful aging is essential in the preparation of effective measures of health promotion and disease/disability prevention in global planning for the well-being of older adults.”

For this reason, the group of researchers analyzed the effects of physical activity on successful aging in a group of adults 49 and over. Their aim was to determine if physical activity alone promoted successful aging. In this case, they defined successful aging as “not experiencing disability and chronic disease (coronary artery disease, stroke, diabetes, cancer), having good mental health and functional independence, and reporting optimal physical, respiratory, and cognitive function during 10 years of follow-up.”

The experimental population included 1,584 adults aged 49 or older, who did not have cancer, coronary disease, or stroke at the outset of the study. The participants self-reported their level of physical activity each week. Successful aging was assessed through the administration of questionnaires by an interviewer. In total, they found that 249 participants had aged successfully at the end of the 10-year follow up period.

This study shows only a correlational relationship between physical activity and successful aging, but the underlying mechanisms behind the relationship remain unclear. The researchers speculate that the inflammatory pathways may play a part, as inflammation is known to be a factor in medical conditions including chronic disease, depression, cognitive decline, sarcopenia, and disability. Past studies have linked physical activity with lower levels of sustained inflammation in older adults, lowering their risk of developing conditions such as the above.

Whatever the reason behind the relationship, the researchers feel that healthcare systems should take these results into consideration when recommending the amount of physical activity older adults should be regularly performing.