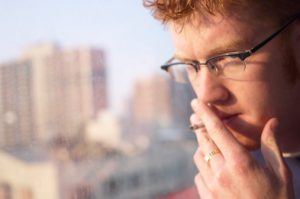 Age-related macular degeneration (AMD) risk has been found to increase with smoking. The study found that smokers, or those who have smoked many cigarettes in their life, are at a greater risk for AMD, compared to non-smokers.

AMD is a common eye disease among the aging population. In fact, it is the leading cause of blindness among Americans over 50.

The theory suggests that smoking damages the blood vessels that keep the retina nourished, or that smoking promotes toxin accumulation in the retina. Either way, the end result is a greater likelihood of developing macular degeneration.

The researchers looked at data from nearly 5,000 adults. Of the group, 4,439 participants were included in the analysis. The researchers found that 24 percent developed early AMD over the course of the 20-year study. Of those, 4.5 percent progressed to late-stage AMD.

Current smoking status was associated with a 36 percent higher risk of AMD progressing from minimal to mild. People who smoked the largest number of cigarettes over time also had a slightly greater risk of early AMD and the risk of progressing to late-stage AMD.

Although the study does not imply any cause-and-effect relations, it does reveal a close association and provides yet another reason why smoking is bad for our health.


How smoking harms your vision

Smoking is a known risk factor for many health problems and complications, so it should be of no surprise that it can negatively impact your vision, too. Smoking has been linked to a number of vision problems and eye diseases, including cataracts, AMD, uveitis, diabetic retinopathy, dry eyes, and infant eye disease.

Just like your body needs nutrients to function, your eyes do so as well. If our eyes are not well nourished, the risk of eye diseases increase. Our eyes get nourished through blood vessels, but smoking known to damage blood vessels. With an insufficient nutrient supply, the eyes are starving, and the risk of disease increases. This is just one of the ways in which smoking negatively affects your vision.

In the U.S. alone, smoking-related deaths have mounted to 480,000 annually, with a financial cost of $300 billion. Although much information has come to light connecting smoking to other health problems, little has been known about the link between the vision and smoking.

The 50th anniversary Surgeon General’s report titled The Health Consequences of Smoking: 50 Years in Progress shares the dangers of smoking, including the associated vision problems. The report stated, “The role of smoking in causing advanced AMD [age-related macular degeneration], which results in loss of vision, is a significant public health concern and a major clinical issue in the United States … because smoking causes both nuclear cataracts and [AMD], it is important for ophthalmologists, optometrists, and other healthcare providers to assess and address the smoking status of their patients.”

There are many resources available to help better educate the public on the dangers of smoking with regards to eye health. For starters, there is the Eye See Tobacco Free brochure educating the readers on the dangers of smoking and promoting a healthy lifestyle. You can access the American Optometric Association’s website for additional resources and information regarding smoking and eye health.

Although for many individuals, vision loss is a result of aging, smoking can definitely speed up the process. Smoking is a risk factor, yet a modifiable one. Quitting will not only help protect your vision but your overall health as well. If you’re still smoking, we hope that you can now see the dangers this harmful habit can bring to your vision and that you now have one more reason to butt out for good.