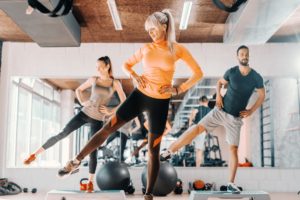 To help keep memory sharp, follow a heart-healthy diet and an aerobic exercise program. This is the recommendation after a study published in the Journal of the American Geriatrics Society found that healthy lifestyle behaviors can help to slow the development of cognitive impairment without dementia (CIND).

For the study, researchers designed a study titled, “Exercise and NutritionaL Interventions for coGnitive and Cardiovascular HealTh EnhaNcement” (or ENLIGHTEN for short). This study was aimed at examining the effects of exercise and diet on cognitive functioning in older adults with CIND. The exercise used in the study was aerobic, or cardio, as it involves activities that increase the circulation of oxygen through the blood. The heart-healthy DASH (Dietary Approaches to Stop Hypertension) diet was also implemented.

The ENLIGHTEN study looked at 160 adults that were aged 55 years or older who didn’t exercise and had memory problems, difficulty thinking, and making decisions. All participants also had at least one additional risk factor for heart disease, such as high blood pressure, diabetes, high cholesterol, or other chronic conditions.

Participants were required to take a number of tests to measure their heart disease risk factors and cognitive ability. Dietary habits and ability to perform daily activities were also assessed. They were then randomly divided into one of four groups. The first group was doing aerobic exercises alone, a second group was following the DASH diet alone, a third was a group following the DASH diet and doing cardiovascular exercise, and the last group received standard health education.

Those in the DASH diet group received instruction about how to follow the DASH diet guidelines. They were asked not to engage in regular exercise until the completion of the six-month study.

Those in the exercise and DASH group followed the program for six months. The last group received weekly educational phone calls conducted by a health educator on health topics related to heart disease but were asked to maintain their usual dietary and exercise habits for six months until they were re-evaluated.

Researchers found that the participants who followed the DASH diet while also maintaining an aerobic exercise program had improved memory, ability to think, and make decisions. The conclusion of the study showed promising proof that these same healthy lifestyle behaviors associated with lower risk of cardiovascular disease can also be helpful when looking to lower risk of cognitive impairment without dementia.