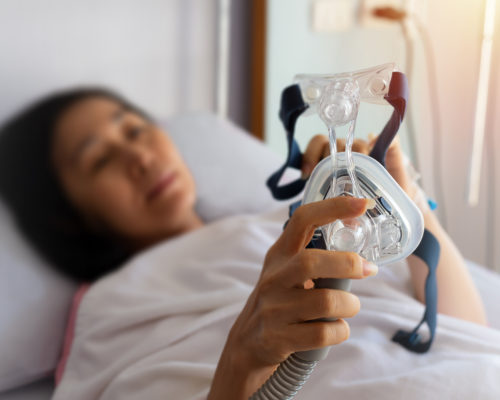 New research suggests that adults with obstructive sleep apnea (OSA) may want to take extra precautions against influenza as the flu season approaches. A study published in the Journal of Clinical Sleep Medicine is the first to find that adults with sleep apnea who did not use CPAP therapy were more likely to be hospitalized with the flu.

It is estimated that 30 million adults in the U.S. have obstructive sleep apnea, the most common sleep-related breathing disorder. It is generally characterized by recurrent episodes of complete or partial obstruction of the upper airway leading to reduced or absent breathing during sleep. Some common warning signs include snoring and excessive daytime sleepiness.

CPAP devices are the most commonly used treatment options for people experiencing breathing problems, the most notable of which is obstructive sleep apnea. A CPAP machine uses a hose and mask or nosepiece to deliver constant and steady air pressure during sleep.

For the study, researchers analyzed the medical records of 53 patients who had sleep apnea and a confirmed case of the flu between 2016–2018. There were 28 patients who did not receive CPAP therapy and 25 patients who were CPAP-adherent. CPAP usage was assessed by data download and was defined as at least four hours per night for at least 70% of nights.

It was found that 61% of the patients who were not prescribed CPAP to treat their sleep apnea were hospitalized with flu compared with 24% of patients who were adherent to CPAP therapy. The study also uncovered statistical information that revealed the patients who were non-adherent to CPAP were nearly five times more likely to be hospitalized with a flu infection, despite having a higher rate of flu vaccination. The study’s authors suggest that poor sleep could have negatively impacted non-adherent patients’ responses to the vaccine.

Study co-investigator Dr. Glen Greenough concluded by saying, “These results would suggest that use of a treatment, CPAP, that improves sleep quality reduces the severity of influenza infection as determined by rate of hospitalization,” he said. “This might suggest that treating sleep apnea and thereby improving sleep quality has a beneficial effect on the immune system. It also suggests that treating sleep apnea with CPAP could help reduce hospitalizations thereby reducing health care costs.”