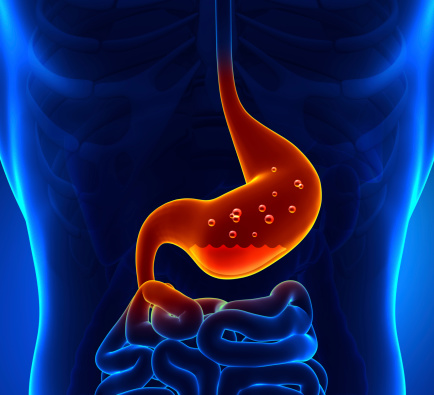 Achlorhydria may sound like a minor health issue but it does have the potential to cause damage to the gastrointestinal system so it should be taken seriously.

The best achlorhydria definition is, the absence or reduced secretion of hydrochloric acid in the stomach. When considering the question, what is achlorhydria, it is helpful to understand what hydrochloric acid is. Essentially, it is a major component of gastric acid, which is important for our immune system and for proper digestion of food.

Doctors will often say that to really define achlorhydria, you need to point out that an absence or reduction in hydrochloric acid can be a sign of several different underlying health conditions. For instance, stomach cancer has been linked to achlorhydria.

Achlorhydria can happen to anyone at any age; however, it seems to be more common in older individuals.

Achlorhydria prevalence is still under review but what we do know is that thus far, studies conducted in Europe report that it ranges from 1 to 4.7 percent in healthy individuals.

When it comes to gender there seems to be an equal prevalence; however, a lot of research points to impaired acid secretion at increased age. One study that looked at over one thousand patients, showed 19 percent achlorhydria in the fifth decade of life and 69 percent in the eighth decade of life. The increased rate was also linked to an increase in frequency of gastric cancer. Some experts suggest that such a finding could be explained by the higher incidence of H. Pylori in our older population.

Achlorhydria causes can be attributed to a number of different factors, including those listed here:

Some risk factors for achlorhydria overlap with potential causes. To sum it up, risk factors include: being over 60 years old, having an autoimmune disease, prior gastric surgery, a history of H. Pylori infection, having elevated levels of gastrin in the blood (Hypergastrinemia), and gastric carcinoid (tumors).

There are some complications that can arise with achlorhydria. Iron deficiency and B12 deficiency, which can happen with this condition, make bones weak, which of course can lead to fractures. Another complication is something called, intestinal metaplasia. This is when the tissue of the stomach and esophagus change into tissue that is found in the intestine. It is called, Barrett’s esophagus.

When there is no acid being produced in the stomach, bacterial overgrowth can also occur. This is something that can lead to H. pylori infection. If the infection causes peptic ulcers it can lead to micronutrient deficiencies and neurological problems, including changes in vision, mood, as well as weakness in the arms and legs.

What are the symptoms of achlorhydria?

So how would you know if you had achlorhydia? Often it is the symptoms that prompt people to seek medical attention, which then leads to a diagnosis. Below we outline the common achlorhydria symptoms.

As we alluded to earlier, achlorhydria can increase the risk of experiencing iron deficiency. A lack of stomach acids makes it hard for the body to absorb iron. Other vitamins and minerals may also rely of an adequate amount of stomach acid for absorption, including calcium, vitamin C and vitamin D.

How to diagnose achlorhydria?

An achlorhydria diagnosis involves a thorough review of medical history to identify any existing conditions or any illness, such as infection that might be linked to symptoms. There are also some routine tests that are usually ordered, including those listed below:

How to treat achlorhydria?

Achlorhydria treatment focuses on the exact cause of the condition. Some of the various approaches are described here, in brief.

If you suspect you are suffering from achlorhydria, it is important to see a doctor; however, when a diagnosis is made, it is worth keeping in mind that in addition to medical treatment approaches, there are some achlorhydria natural treatment options. Check out the list below.

Prevention and prognosis of achlorhydria

While there really aren’t any preventive strategies for achlorhydria, you might say that there are some secondary steps that can be considered. For example, prevention of H. Pylori is possible through improvement in sanitation and effective antibiotic treatments. Alcohol abuse and excessive use of anti-inflammatory drugs have been linked to H. Pylori so controlling use of these substances could help. If there was some way to lower the number of gastric surgeries, this too could limit atrophy and thus the number of achlorhydria cases.

Achlorhydria prognosis is hard to pinpoint since there are various causes and conditions involved. Gastric cancer, bacterial overgrowth, and hip fracture have all been associated with increased mortality and morbidity in relation to achlorhydria.

Since some of the symptoms of achlorhydria can be associated with various health problems, it is important not to jump to conclusions. It is true that in some cases, it will take a while for the doctor to determine a true cause for your symptoms. In the case of H. Pylori, treatment can include more than one series of antibiotics and regular check-ins with a healthcare provider to determine if the infection has gone away.

If you have already received a diagnosis of achlorhydria and have started treatment, talk to a doctor before adding any natural remedies to the mix. While in many cases, it will be perfectly fine to include natural approaches; some may conflict with conventional treatments.