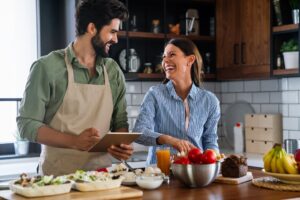 Heart failure is a potentially deadly condition affecting millions of people yearly. However, new research suggests that eating healthy foods may lower your risk of death from heart failure. However, many people cannot easily access nutritious foods, making it more difficult to reduce their risk of disease.

A healthy diet is important for many reasons. It can help to prevent diseases such as coronary heart disease, stroke, and diabetes. Eating healthy foods can also help to lower blood pressure and cholesterol levels. Now, this new study has found that healthy eating may also reduce the risk of death from heart failure – but only for those with access to healthy foods.

Food insecurity occurs when people don’t have reliable access to enough food to lead active, healthy lives. It can be caused by poverty, unemployment, low wages, food deserts, or any number of other socioeconomic factors. As a result, food-insecure people may go hungry or eat food of reduced quality, variety, or desirability.

Previous studies have found that food insecurity is associated with various health problems, such as malnutrition, obesity, and chronic disease. However, little research is available about its relationship to death from heart failure.

“Heart failure mortality is on the rise in populations that live in socioeconomic deprivation, and, importantly, we believe that nutrition plays a role in heart failure mortality, and food insecurity may be particularly detrimental in this population,” said lead study author Keerthi T. Gondi, M.D. “We know that important relationships exist between food access, affordability, and heart health. This will have to be addressed in order to make changes to the burden of cardiovascular disease in populations that live in socioeconomic deprivation moving forward.”

This study is the first of its kind to examine the relationship between local food environments and heart failure mortality. Researchers reviewed 2018 data from the
National Vital Statistics System—a database of all births and deaths in the U.S. Associations were indexed among the heart failure death rates in each county and the Food Insecurity Percentage score and Food Environment Index score.

It was found that counties with higher food insecurities had a higher rate of death from heart failure. After adjusting for various socioeconomic and health factors, including income inequality, poverty rate, rural vs. urban locations, obesity, Type 2 diabetes, and smoking, the outcome stayed true. Those who lived in areas with the lowest Food Environment Index and the highest food insecurity were found to have higher heart failure rates than the death rate for other subtypes of cardiovascular disease and the all-cause death rate.

Due to this mounting evidence of a relationship between food insecurity and heart failure death rate, The American Heart Association and others are now pledging to broaden their efforts to address the social and psychological determinants of well-being and health behaviors. This will include such measures as improving access to nutritious food for people at every stage of life.

Keeping the heart strong and healthy is vital for enjoying a high quality of life as you age. Heart Rescue was designed to help support and promote cardiovascular health using a variety of ingredients, including omega-3 fatty acids, CoQ10. The omega-3 fatty acids play an important role in cardiovascular function, while CoQ10 is involved in energy production at the cellular level.

These two heart superstars are supported by five other ingredients which can help to promote and support cardiovascular function as you age. This formula’s health benefits can help strengthen the heart muscle, support circulation, and help reduce the risk of heart disease.