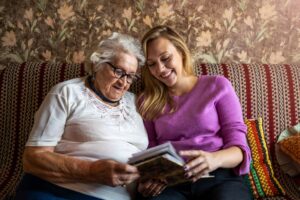 According to a new study, people with abnormalities in the heart’s left atrium may have a higher risk of developing dementia later in life by 35%. This risk was found in people with or without symptoms, including those who did not have atrial fibrillation or stroke, two conditions known to be associated with dementia.

The heart’s left atrium is responsible for receiving blood from the lungs and pumping it into the left ventricle, which then pumps the blood throughout the rest of the body. Previous studies have found an abnormality in the functioning or structure of the left artery can signal a person’s cardiac risk. This condition, known as atrial cardiopathy, is associated with an increased risk of stroke and atrial fibrillation, which are both associated with a heightened risk of dementia.

This new study highlighted the need to better understand the relationship between a state of atrial dysfunction that may not be presenting symptoms and the association with dementia.

These findings suggest that a state of atrial cardiopathy that leads to dementia is not entirely a result of atrial fibrillation or stroke alone. Researchers believe these results
emphasize the importance of lowering vascular and heart disease risks.

More research is needed to evaluate the possibility of silent strokes or asymptomatic atrial fibrillation that may be missed in clinical trials.

Some degree of cognitive decline is nearly inevitable as you age. However, as this study shows, numerous other factors can take a toll on the ability of the brain to function at peak potential. This can affect memory, concentration, and overall brain function.

The Smart Pill can help to enhance cognitive function and memory through 9 ingredients that help to support, nourish, and maximize brain health. These include ginkgo biloba, huperzine A, bacopa extract, rosemary extract, and a B vitamin complex. This unique formula helps to boost circulation, fight free radicals, and provide nutritional support to assist with cognitive decline.

Keeping the heart strong and healthy is vital for enjoying a high quality of life as you age. Heart Rescue was designed to help support and promote cardiovascular health using a variety of ingredients, including omega-3 fatty acids, CoQ10, magnesium, and hawthorn extract. This formula’s health benefits can help strengthen the heart muscle, support circulation, and help reduce the risk of heart disease.