Home » Anti-Aging » A Treatment to Reverse the Signs of Aging 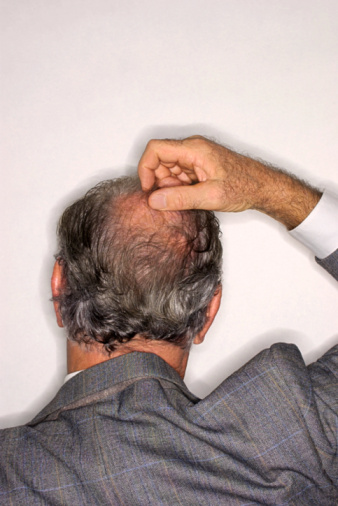 Many men and women shudder at the thought of those first peeping strands of grey hair, and are willing to do whatever it takes to dye them away on a regular basis.

The good news is that you may not have to stress much longer about covering up those pesky grey hairs.  New research published in The FASEB Journal uncovers a new compound that can reverse oxidative stress, associated with aging, greying hair, hair loss, and vitiligo (depigmentation of the skin).

Previous research from 2009 found that it’s not actually the aging process that causes hair to turn grey, but is rather the result of oxidative stress. Oxidative stress is caused by a massive build-up of hydrogen peroxide in the hair follicles. This build-up of hydrogen peroxide blocks the normal production of melanin, which is a natural chemical in the body that is responsible for the color pigmentation of hair, eyes and skin.  This disruption in melanin causes the hair to bleach itself from the inside out, resulting in greying hair. With this in mind, researchers from the United Kingdom and Germany set out to find a revolutionary new treatment to remedy this build-up of hydrogen peroxide, and thus reverse greying hair.

A Wonder Treatment for the Effects of Aging?

Researchers from the Institute of Pigmentary Disorders, in association with E.M. Arndt University of Greifswald and the Center for Skin Sciences at the University of Bradford, report that they have discovered a UVB-activated compound called PC-KUS (a modified pseudocatalase) that can actually reverse the massive build-up of hydrogen peroxide that is responsible for greying hair.

In addition to providing a treatment for greying hair, the researchers also claim that PC-KUS is an effective treatment for vitiligo.  Vitiligo is a skin condition that occurs in a loss of melanin which results in irregularly shaped patches of white skin. In the United States, between one and two million people suffer from this disease; the white patches usually start small and spread over the body with time.  While vitiligo affects all races, it is more noticeable in people with darker skin. Moreover, vitiligo is a cosmetic disease that it can have a negative impact on a person’s psychological and social well-being. The discovery of the PC-KUS compound has found to stop and even reverse the loss of pigmentation to the skin. Some individuals had even regained color to their skin.

For this study, the researchers evaluated 2,411 patients from different countries that had been diagnosed with vitiligo. 57 participants had strictly segmental vitiligo (SSV), and 76 were diagnosed with mixed vitiligo (a combination of SSV and non-segmental vitiligo). The researchers found that treatment with PC-KUS, in the form of a topical agent, resulted in restored color to the eyelashes and the skin.

Does this Spell the End of Grey Hair?

The results of this study mean that those pesky grey hairs may not be a problem anymore.  This news will surely excite you, especially if you’re someone that spends money and countless hours coloring your grey hair in an effort to mask one of the most common signs of aging. Additionally, and even more exciting, if treatment with PC-KUS becomes readily available, it might drastically improve the quality of life of people suffering with vitiligo.