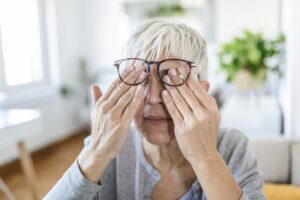 A new study from Taiwan shows that people with a specific type of glaucoma called normal-tension glaucoma may have a high risk of developing Alzheimer’s Disease. Previous studies have produced mixed results between glaucoma and Alzheimer’s, so researchers focused on this specific type of eye disease.

For the study, researchers compared the incidence of Alzheimer’s in 15,317 people with normal-tension glaucoma and 61,268 age- and gender-matched people without glaucoma.

After adjusting for hypertension, diabetes, coronary artery disease, hyperlipidemia, and stroke, researchers found that people with normal-tension glaucoma were 52 percent more likely to develop Alzheimer’s compared to those without glaucoma. Older females with a history of stroke had the highest incidence. Researchers also noted that the use of glaucoma eye drops did not protect against Alzheimer’s disease or increase the risk.

Researchers believe that not everyone with normal-tension glaucoma will develop Alzheimer’s disease, but this study goes to show how there should be Alzheimer’s screening for at-risk patients. The two conditions are similar in that they both occur when nerve cells deteriorate and die, a neurodegeneration process.

In Alzheimer’s, it affects the nerve cells in the brain that are responsible for cognition and memory. In glaucoma, neurodegeneration affects the retinal ganglion cells in the optic nerve, which can cause blindness over time.

Many factors, including glaucoma, can contribute to cognitive decline, taking a toll on the ability of the brain to function at peak potential. This can affect memory, concentration, mental health, and overall brain function. The Smart Pill can help to enhance cognitive function and memory through 9 ingredients that help to support, nourish, and maximize brain health. These include ginkgo biloba, huperzine A, bacopa extract, rosemary extract, and a B vitamin complex. This unique formula helps to boost circulation, fight free radicals, and provide nutritional support to assist with cognitive function.

As this research proves, it is vital to ensure vision is kept as healthy as possible as you age, as it can affect more than just the eyes. One of the primary causes of age-related vision loss is low levels of lutein and zeaxanthin. These natural pigments have been shown to protect the eye from oxidative damage caused by ultraviolet light and environmental factors.

20/20 Vision contains 20 mg of lutein and 2 mg of zeaxanthin to help give your eyes the nutritional support they require. In addition to those two ingredients, this unique formula also contains various vitamins, minerals, and herbal ingredients to help support and maximize vision and eye health.