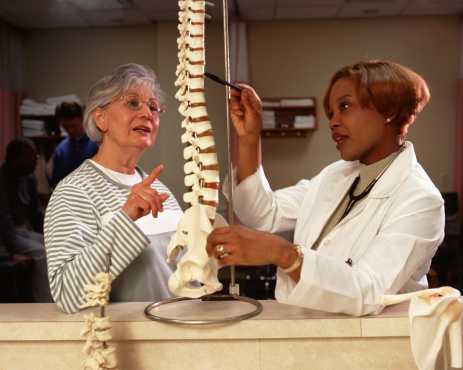 Osteoporosis is a disease that affects a surprising number of people: 1 in every 5 men and 1 in every 3 women will suffer from a broken bone as a result of osteoporosis. More than 80 percent of bone fractures among the senior citizen population (older than 50) are osteoporosis-related, and between 70 and 90 percent of hip fractures are the result of this degenerative disease.

Osteoporosis usually shows its signs during the late 40s and early 50s, but researchers have been trying to devise new ways to detect the signs years before osteoporosis fully develops.

Some of the early warning signs of osteoporosis include:

Of course, these are just general signs that can point to the disorder, but doctors do have a few more sophisticated techniques to determine whether osteoporosis will be a threat to your future. X-Rays are often used to assess bone fragility, as doctor’s search for tiny fractures in the bones that can point to signs of damage. However, a brand new technology has just been released that may revolutionize the diagnostic field for rheumatologists and orthopedists looking into the prevention of the disorder.


A Revolutionary Method for Osteoporosis Detection and Prevention

A handheld device has been developed by the University of Southampton – in collusion with the Engineering and Physical Sciences Research Council – modeling off a device originally designed at the University of Santa Barbara, in California. The osteoporosis prevention device is currently going through its testing phase and it is being refined; however, the researchers’ goal is to make the device widely available within the next five years.

The device measures the ability of bone tissue to repair itself, thereby preventing small cracks from becoming larger fractures. It uses a microscopic needle to press into the surface of the bone, testing the fragility of the bone tissue. If the needle penetrates too deeply into the bone (40 micrometers), it indicates that the bone is at serious risk of fracturing. A healthy bone will only be penetrated by the needle up to a depth of 20 micrometers.

The cost of treating osteoporosis is predicted to cost the U.S. more than $130 billion in the next 40 years, but this tool provides doctors with a method of detection and prevention of the bone disorder. The device could potentially be the early warning system that enables doctors to treat the problem before it worsens, thus preventing a staggering number of bone injuries. The new device is currently being tested at the Southampton General Hospital, involving patients that have had hip replacement surgeries. The new technique may prove to not only be more effective than bone density scanning, but also more affordable.

The current “gold standard” of diagnosing osteoporosis – bone density scanning – is an imperfect solution, as it doesn’t provide insight on the quality of the bone. It focuses rather on finding fissures and cracks that could lead to more serious fractures. However, the study reveals that this new technology is designed to assess the quality of the bones, helping doctors in the prevention and understanding of bone health to reduce fractures.