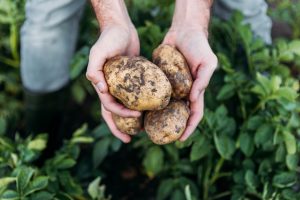 People who love potatoes and have hypertension will be happy to hear about a new study from Perdue University. It suggests that increased dietary potassium can reduce blood pressure. The study published in Nutrients goes against some popular beliefs about potatoes and their role in heart-healthy lifestyles.

For the study, researchers investigated the effects of increased dietary potassium from a whole food source or a potassium supplement on blood pressure and other cardiovascular disease risk factors compared to a ‘typical American’ control diet (lower potassium intake). The study included 30 pre-hypertensive and hypertensive men and women.

The results showed that including baked/boiled potato consumption as part of a typical American diet had the greatest benefit on reducing sodium retention, even more than the supplement. It also resulted in a greater systolic blood pressure reduction compared to the control diet. However, french fries were not found to have any effect on hypertension.

“While significant emphasis is often placed on reducing dietary sodium intakes to better control for blood pressure and cardiovascular disease risk, that’s only half of the story,” says Connie Weaver, Ph.D., the primary investigator. “Potassium plays just as an important role, and perhaps the ratio of potassium to sodium is most important in the context of the entire food matrix, as the potato meal resulted in a greater reduction of sodium retention than the potassium supplement alone.”

There is very limited evidence of the effects of increased dietary potassium on blood pressure from clinical trials. This study is now one of the first known controlled feeding interventions to investigate dietary potassium.

Researchers believe that clinical trials are important to establish a causal link between diet and health. As many Americans fall significantly short of meeting daily potassium intakes, these findings show the importance of promoting whole food sources of potassium such as potatoes.

Through this carefully controlled balance study, researchers were able to determine the mechanism by which potatoes reduced blood pressure. Overall, it was concluded that boiled or baked potatoes can help reduce systolic blood pressure, and baked french fries have no adverse effects on blood pressure, so they can be included as part of an overall healthy diet.