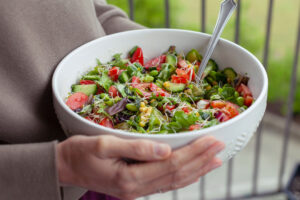 If you’re looking for a natural way to beat depression, consider switching to a Mediterranean diet. According to a new study, this type of diet can be as effective as antidepressants in reducing symptoms of the condition. So, if you’re feeling down, give it a try – you may be surprised by how well it works.

Depression Has No Age Limit

Depression is a health condition that affects approximately 21 million adults in the United States. It is also a significant risk factor for suicide, the leading cause of death in young adults.

The study looking at the connection between diet and depression was a 12-week randomized control trial and is the first to assess the impact of a Mediterranean diet on the symptoms of depression in young men (aged 18-25).

The diet used in the study was rich in vegetables, whole grains, legumes, oily fish, and raw, unsalted nuts. The primary focus of the study was on increasing the quality of food consumed while reducing the intake of processed foods, sugar, and red meat.

“We were surprised by how willing the young men were to take on a new diet,” study author, Jessica Bayes said. “Those assigned to the Mediterranean diet were able to significantly change their original diets, under the guidance of a nutritionist, over a short time frame.”

It was found that the young men who changed their diet to follow the Mediterranean style diet had significant changes in their depression. This study adds to the field of nutritional psychiatry, which aims to explore the effect that nutrients, foods, and dietary patterns can have on mental health.

Bayes explained, “There are lots of reasons why scientifically we think food affects mood. For example, around 90 percent of serotonin, a chemical that helps us feel happy, is made in our gut by our gut microbes. There is emerging evidence that these microbes can communicate to the brain via the vagus nerve, in what is called the gut-brain axis.”

It is estimated that 30 percent of depressed patients do not respond well to standard depression treatments such as cognitive behavior therapy and antidepressant medications. So, it is vital to start looking at other therapies and alternative treatments. This study aims to guide medical doctors and psychologists into referring depressed young men to a dietitian or nutritionist as an essential part of treating clinical depression.

A number of factors can take a toll on the ability of the brain to function at peak potential, including stress and depression. This can affect memory, concentration, and overall brain function.

The Smart Pill can help enhance cognitive function and memory through 9 ingredients that help support, nourish, and maximize brain health. These include ginkgo biloba, huperzine A, bacopa extract, rosemary extract, and a B vitamin complex. This unique formula helps boost circulation, fight free radicals, and provides nutritional support to assist with cognitive function.