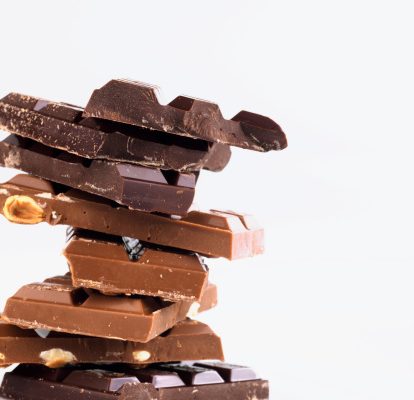 Chocolate is arguably the world’s favorite ‘junk food’- with 9 out 10 people reporting that they love it and 50 % of the population confessing that they can’t go a day without it.

Although some may argue that chocolate is not a junk food at all (because it is made with cocoa which is high in nutrients and antioxidants), the majority of chocolate available on the market is loaded with sugar and calories, and is so highly processed that any potential health benefits are negated. Whether you choose to classify chocolate as a junk food or a health food—the fact remains that our much beloved chocolate may be headed for a drought.

The Mayans have worshiped chocolate for over 1,000 years, calling the cacao tree (where cocoa beans come from) ‘Theobrama Cacao,’ which translates to ‘Food of the Gods.’ In climates that were not conducive to the growth of cocao tress, the cocoa bean was prized so highly that it was used as a form of currency, and 100 beans could be used to buy a turkey or a slave. In the 1600s chocolate became popular amongst Europeans, but only the extremely wealthy could afford the ‘divine’ commodity.  Solid chocolate, with sugar, milk and an abundance of calories, was first invented in 1879 by a Swiss chocolate manufacturer but chocolate didn’t become readily available and affordable to the masses in America and Europe until the 1900’s. Since then it has made its way into the homes and hearts of people across the globe.

A Chocolate Drought in 2014

Today, we take chocolate for granted, and its vast availability in stores across the country would suggest that there is no shortage of it. However, experts are now warning that the world is facing a chocolate drought. The reason for this is that 40 percent of the world’s cocoa beans are grown in the Ivory Coast, (Africa) which is currently experiencing severe political unrest.

The unrest has caused many certified fair trade cocoa farmers to flee the area and as a result there is a significant drop in the global availability of fair trade cocoa. According to leading British chocolatier, Angus Kennedy, we are facing “one of the biggest challenges to hit the (chocolate) industry in recent history…Supplies of sustainable cocoa are set to run out, it’s that simple.” Unfortunately, even if the political situation in the Ivory Coast improves, experts predict that it will take at least 3 years for the number of fair-trade cocoa farmers to return to its previous level.

To make matters worse, the third largest supplier of cocoa (Sulawesi, Indonesia), is experiencing issues with the farming of cocoa. Apparently, the soil fertility has declined in Sulawesi, and the cocoa trees are starting to age. The aging trees will require a lot of care in order to maintain their ability to continue to yield a steady supply of cocoa. This is problematic because many of the Sulawesi farmers are not trained on how to take care of the trees as they age, so there is a very real possibility their supply will start to dwindle.

To compound the problem, there has also been a massive rise in global chocolate consumption over the past couple of years, with an average annual increase of 3%.  All of these factors combined have some analysts predicting that the world’s supply of cocoa will run out by 2014. Despite this prediction, a complete obliteration of all cocoa seems a bit farfetched and I wouldn’t start ‘rationing’ your chocolate supplies just yet.