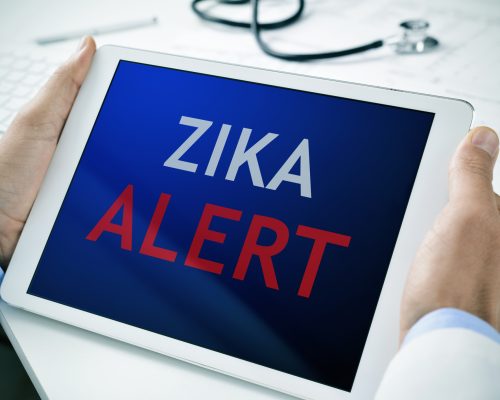 Zika virus was first discovered in 1947, and its name is derived from the Zika forest in Uganda where it was found. Human cases of Zika virus were first reported in 1952, but until last year cases have been seen almost exclusively in tropical areas.

Zika virus is primarily transmitted through a bite from an infected Aedes aegypti or Aedes albopictus mosquito. A mosquito becomes infected by sucking the blood of an infected person and then passing it on to others. Additionally, males can transmit Zika virus through sexual intercourse as Zika virus can remain in semen much longer than blood.

Four out of five individuals will not present symptoms of Zika virus and those who do often experience mild symptoms including fever, rash, joint pain, or red eyes. The real risk from Zika virus is to unborn babies as the CDC has confirmed that Zika virus can lead to birth defects, including microcephaly, the development of an abnormally small head and brain. Zika virus can also increase the risk of miscarriage and other brain-related defects.
If a woman is trying to get pregnant or is pregnant, the CDC advises that they avoid areas with known cases of Zika and take the necessary precautions to protect themselves against mosquito bites. This can be done by wearing mosquito repellent, wearing long sleeves and long pants, and staying indoors as much as possible.

Additionally, if women are living in a Zika-ridden area, the use of condoms is highly recommended – or couples should refrain from sex. The same protocol should be considered if a male has visited a Zika-ridden country and has returned – he should abstain from sex for at least eight weeks. If a man has been diagnosed with Zika, sex should be avoided for six months.

There isn’t currently any information revealing a threat to future pregnancies as long as the virus is cleared from a person’s blood stream.

American cases are starting to appear, and experts suggest Zika will span into Florida, Texas, and Louisiana due to their hot climate. The A. aegypti mosquito can range as far north as San Francisco, Kansas City, and New York City, although health officials have said infections that far north are unlikely.

There is currently no vaccine available for the Zika virus, so prevention is your best bet in order to reduce your risk. Research on Zika has extended in order to better understand the virus and develop a potential vaccine and cure.