Home » Health News » Your sleep could depend on what you eat: Study 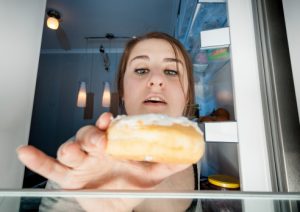 The study, led by Marie-Pierre St-Onge, PhD, assistant professor in the department of medicine and Institute of Human Nutrition at Columbia University Medical Center in New York, N.Y, was a randomized, crossover study involving 26 adults – 13 men and 13 women –

The participant ewer all of normal weight and had an average age of 35 years. As part of the study, the participants spent 5 nights in a sleep lab, spending 9 hours in bed from 10 p.m. to 7 a.m., sleeping for 7 hours and 35 minutes on average per night.

Using polysomnograhy, the scientists gathered objective sleep data every night. From day 1 to day 3 the participants were on a controlled diet. And data was collected on night 3. On Days 4 and 5 the participants ate a diet of their choice, and data was once again collected on night 5.
The study showed that greater fiber intake resulted in more deep, slow wave sleep. On the other hand a diet rich in saturated fat resulted in less slow wave sleep. And an increase in sugar intake prompted more arousals from sleep.
Moreover, the study revealed that eating fixed meals provided by a nutritionist, helped participants fall asleep faster than eating self-selected meals. Participants who consumed nutritionist-selected controlled meals fell asleep in 17 minutes as against the 29 minutes required for participants who consumed foods and beverages of their choice.

Dr. St-Onge and her team’s aim in conducting this study was to prove that diet quality influenced sleep quality, but even they were surprised that a single day of greater fat intake and lower fiber could influence sleep parameters.
The details of this important study, which emphasizes the fact that diet and sleep play a crucial role in leading a healthy lifestyle, can be culled from the Journal of Clinical Sleep Medicine (January issue).

According to Dr. St-Onge, the fact that diet plays such a crucial role in sleep has tremendous health implications. Especially since the role of sleep in the development of chronic disorders such as diabetes, hypertension, and heart disease, is getting a lot of recognition amongst the medical community.

The authors believe, the study is an indication that diet-based recommendations might be used to improve sleep in those with poor sleep quality. It is evident from the study that making lifestyle choices that promote healthy sleep, such as eating a nutritious diet and exercising regularly, will go a long way in promoting good health.