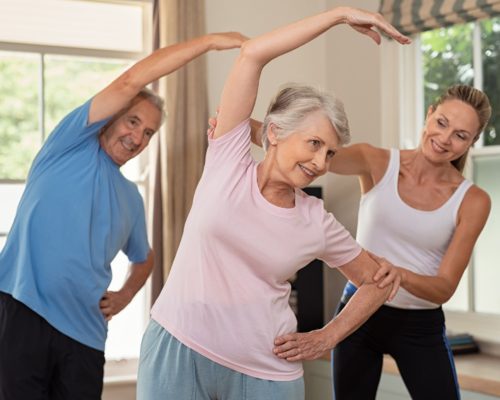 In the fight against dementia, it might be time to put the brain games away for a moment. Instead, tie up your sneakers and take a walk around the block.

Currently, there is no noted medical treatment for the 50-million people worldwide with a dementia diagnosis. And the key may not lie in treating the condition itself, but rather in prevention. Numerous studies have associated increased activity to promoting memory and cognitive function, while potentially delaying the onset of dementia and Alzheimer’s. Furthermore, eating a diet that emphasizes anti-inflammatory foods—like the Mediterranean Diet—has had the same effect. These two lifestyle factors appear to keep the brain healthy and functioning into advanced age.

The WHO recommends getting at least 150-minutes per week of moderate-intensity exercise. This would include any form of activity that causes a bit of a sweat but does not lead to huffing and puffing or inhibit the ability to maintain a conversation. Shooting for about 30-minutes per day is ideal, and it can be split into smaller sessions. Studies have shown that exercise has the ability to improve cognitive function in people with mild cognitive impairment, a common precursor to Alzheimer’s.

The Mediterranean Diet is rich in vegetables, fruit, and healthy fats from olive oil and fish. These items, as well as nuts like walnuts, are associated with low inflammation and seem to promote enhanced brain function through various pieces of research. A study from about a year ago showed that participants who ate a Mediterranean diet had much lower levels of beta-amyloid deposits in their brain, a major indicator of Alzheimer’s and dementia.

Getting out for a daily walk and making conscious food choices can help your mind as much as your body. Include these two actions in your preventative lifestyle to give yourself a shot at living better, longer.