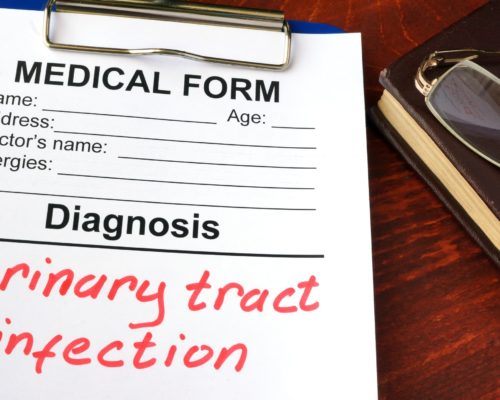 UTIs in men are more common in those over the age of 50.

Having female anatomy increases the risk of UTIs, while the male anatomy typically keeps UTIs at bay. Bacteria have a more difficult time traveling through the urethra because it’s washed out by urine.

Risk factors that do increase the odds of a UTI in men include an enlarged prostate, kidney stones, diabetes, bladder catheter insertions, and other health conditions which affect the immune system.

UTIs in men can sometimes be mistaken for other urinary conditions due to similar symptoms. Symptoms of a UTI in men include frequent urination, a strong and constant urge to urinate, releasing only a small amount of urine at a time, bloody or foul-smelling urine, lower abdominal pain, or a burning pain while urinating. If these symptoms are accompanied by lower back pain, fever, nausea, or chills, then it could be a sign of a kidney infection.

UTIs are commonly caused by bacteria, so your doctor will put you on a course of antibiotics. In rare cases, a UTI may be caused by a virus or fungus.

The diagnostic process of a UTI in men is the same as in women – a urine sample is collected and tested to determine the bacteria responsible for the infection.

Unlike women, for which there are many preventative tips, men don’t have many aside from completely emptying the bladder regularly. Urine that lingers in the bladder can lead to bacteria growth and contribute to a UTI. Therefore, drink plenty of fluids to push out bacteria.

It’s important to catch a UTI early on to prevent complications. The moment you experience symptoms, go see your doctor to get a diagnosis and start treatment.