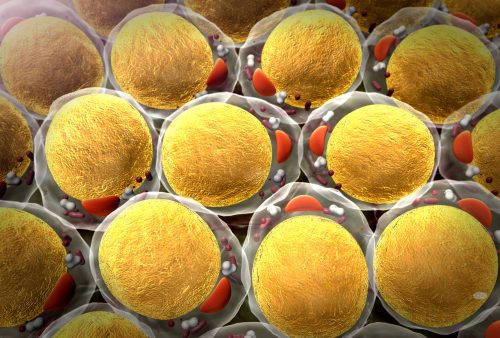 The hormone leptin controls weight, but until now it wasn’t understood how it sends brain signals for fat breakdown. Researchers at Instituto Gulbenkian de Ciência in Portugal, along with Jeffrey Friedman’s group at Rockefeller University in the U.S., found that neuron stimulation in fat can aid in fat breakdown, thus contributing to weight loss.

Fat tissue makes up 20 to 25 percent of body weight and energy storage. Previously, the research team found that the leptin hormone informs the brain about how much fat is available in the body. When leptin levels are low our appetite increases, and when they are high it leads to fat breakdown. The circuit with which leptin sends signals to the brain has been unknown up until now.

Study lead, Ana Domingos, said, “We dissected these nerve fibers from mouse fat, and using molecular markers identified these as sympathetic neurons. When we used an ultra sensitive imaging technique, on the intact white fat tissue of a living mouse, we observed that fat cells can be encapsulated by these sympathetic neural terminals.”

Domingos added, “The local activation of these neurons, leads to the release of norepinephrine, a neurotransmitter, that triggers a cascade of signals in fat cells leading to fat hydrolysis. Without these neurons, leptin is unable to drive fat-breakdown.” Domingos then concluded, “This result provides new hopes for treating central leptin resistance, a condition in which the brains of obese people are insensitive to leptin.”

The findings were published in the journal Cell.