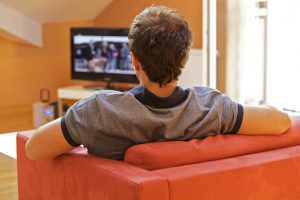 Spending long hours in front of the TV can increase a person’s risk of blood clots and other health complications. The clot forms in the leg or pelvis due to inactivity and then can travel to the lung, leading to pulmonary embolism, a serious health threat.

The study included over 86,000 people in Japan who had to report the number of hours they spent watching TV. Participants were followed for over 19 years. During this time, 59 died of pulmonary embolism.

Compared to people who spent less than 2.5 hours a day watching TV, the risk of pulmonary embolism increased 70 percent in those who watched TV for 2.5 to 4.9 hours a day. For every two additional hours, the risk of pulmonary embolism increased an additional 40 percent.
Americans typically watch more TV than Japanese, so the threat is quite real for Americans.

Overall, there are lower rates of pulmonary embolism in Japan, compared to the U.S., but the Japanese are increasingly adopting a sedentary lifestyle, raising their risk.

Symptoms of pulmonary embolism include chest pains and shortness of breath.

The researchers recommend that you cut down on your TV watching time or at least try to get up at least once an hour – maybe during commercials?