Home » Health News » Want to Keep Your Memory Churning and Reduce Your Risk of Alzheimer’s? Eat This 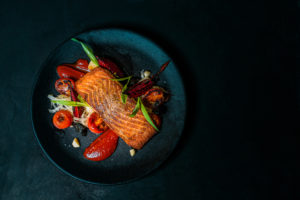 By now I’m guessing you’ve heard of the Mediterranean diet. It’s the style of eating that’s associated with many health benefits including better cognitive function, improved heart health, and a lower risk for a host of illnesses.

For the most part, it is built around fish, olive oil, leafy greens, and other high fiber and healthy fat-rich foods. A rundown of it would look a little like this:

But what if you don’t like all of that stuff? Are there any standouts on the list that might do more to boost brain health and improve memory than others?

A recently published study by the National Institutes of Health suggests that there are two major players when it comes to protecting memory and limiting cognitive decline: fish and vegetables.

The research team reached its conclusion after following more than 7,750 participants for 5-10 years. They tracked dietary habits, then used that data to identify foods most important in lowering the risk of cognitive impairment and cognitive decline.

The risk of cognitive decline is the chance that in 10 years your cognition will be worse than it is currently.

Fish was the clear-cut most important food for brain health, showing an ability to lower the risk for cognitive impairment and decline. In fact, it was the only food associated with lowering the risk for both.

Vegetables came in at a clear second place for lowering the risk of cognitive impairment, while all other foods showed only moderate effects. Those moderate effects, however, were still not negative. Fruits, whole grains, and olive oil remain healthy!

But if you’re wondering if there are any foods to include more of in your Mediterranean diet, or to skip out on occasion, this study may supply some answers. For added brain benefit, go a little heavier on the fish and veggies.

Skimping on the avocado, however, likely won’t boost your risk for Alzheimer’s!