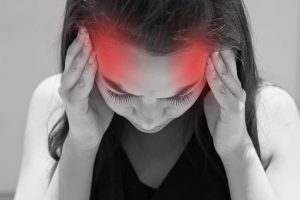 A vascular headache is a condition characterized by dilation or swelling of the blood vessels leading to headache pain. There are many kinds of headaches that cause blood vessels in the head to become enlarged, distended, or inflamed. Patients often complain of throbbing pain that worsens with physical activity when afflicted with a vascular headache.

Vascular headaches are primarily associated with abnormal functioning of blood vessels found within the brain or the entire vascular system as a whole. This type of headache may last a few minutes to a few hours in the majority of cases, however, some have been known to last much longer. The following are some types of vascular headaches.

Considered the most common type of vascular headache, causing pain that radiates in pulses or is throbbing in nature, usually on one side of the head. Symptoms are often so debilitating that it affects the ability to live your life. It can be accompanied by nausea, vomiting, and extreme sensitivity to light and sound. Migraines attacks can last hours to days with a severe disabling pain. Migraines are typically associated with an “aura,” which are visual disturbances, such as flashes of light or wavy, zigzag vision.

Occurring in bouts of frequent attacks or in clusters, cluster headaches are considered one of the most painful types of headaches. They present as intense unilateral headaches accompanied by severe pain in or around the eye, often disrupting sleep and causing misery for sufferers. Cluster headaches can last for weeks to months, but are usually followed by remission periods when a headache stops. Remission may last several months or even years.

Cluster headaches are more commonly seen in men and are fortunately not life-threatening. They can strike quickly and without warning, often leading to excessive tearing of the eyes and redness.

Related: Cluster headache vs. migraine: Understanding the difference in causes, symptoms, and treatment

Also known as a migraine without aura, this type accounts for nearly 60–80 percent of all migraine cases. An aura, commonly described as being a visual disturbance, is not present with this type of a migraine. It is not certain what causes a migraine, but scientists believe that the brain chemicals, serotonin and dopamine, play an important role. Additionally, various chemicals may be released that cause vessel contraction, leading to the characteristic throbbing nature of a migraine.

Known as a migraine variant, this type of headache is characterized by temporary weakness on one side of the body during a migraine attack. The face, arm, or leg on the affected side may feel numb or have the sensation of pins and needles. Speech difficulties, vision problems, and confusion may also be present. Patients who suffer from this type of headache are often in a great deal of stress, as the symptoms may mimic that of a stroke. Symptoms of a hemiplegic migraine may also last an hour to several days but typically resolve within 24 hours.

A rare condition previously thought to be a variant of a migraine, but recent observations using magnetic resonance imaging and its usual clinical presentation have led to speculation that the illness more likely represents an inflammatory cranial neuropathy. This has led to the reclassification of an ophthalmologic migraine from a subtype of migraine to a category of neuralgia in the International Headache Classification.

The condition commonly present with transient migraine-like headaches with long-lasting oculomotor and pupillary abnormalities. It commonly occurs in children, but a number of cases in adults have been reported. Symptoms of this condition almost always resolve on their own, however, some deficits may persist.

These headaches are known for beginning at the base of the brainstem and are known for causing additional symptoms such as dizziness, double vision, and lack of coordination. The manifestation of an aura may also present itself, which can occur about 10 to 45 minutes before the onset of headache pain. Basilar artery migraine often begins on one side and then gradually spreads, getting stronger. Symptoms may last anywhere from four to 72 hours. Recovery times may vary as patients often feel drained for up to 24 hours once symptoms have subsided.

A type of headache that typically becomes more severe after a strenuous activity, such as weightlifting or sexual intercourse. They can be a sign brain abnormalities or other diseases. Other activities that may precipitate the development of an exertional headache include running, coughing, sneezing, and having strained bowel movements. Most cases of this type of headache are considered benign, meaning there is no serious underlying medical condition causing them and they often resolve on their own.

Considered an especially severe and long-lasting form of migraine headache causing throbbing pain, nausea, and sensitivity to light and sound. It is believed that only about one percent of migraine sufferers have status migrainosus. Affected patients often have to visit the hospital to achieve symptom relief.

The second most common type of vascular headache that is produced by a fever that manifests during conditions such as pneumonia, measles, mumps, and tonsillitis. The presence of foreign chemicals in the body may also lead to the development of a toxic headache.

Vascular headaches tend to have triggers—things or circumstances that bring on the episode. It is best to identify these triggers if you suffer from a chronic headache and to avoid them as much as possible. The following are common triggers for vascular headaches, but some may be unique to the individual.

Treatment will depend on the type of headache that you present with, however, there are several treatments and remedies that may be useful in most cases. Your doctor will generally prescribe some sort of pain reliever medication that will help you deal with particularly excruciating symptoms. However, in cases with migraines and cluster headaches, specifically tailored treatment will usually be required.

Treatment for vascular headache may include:

Not all aspects of our health are within our control and there may be a time where the advice and care of a trained medical professional will be required to help control your headache.

Essential oils for migraines and headaches