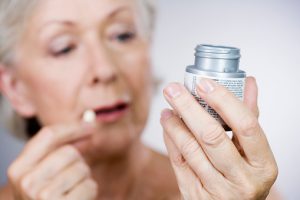 The heart is one of our most important organs, so it makes sense that diseases affecting it are the leading cause of death in America. Normally, the heart contracts in a rhythmic fashion to propel oxygenated blood through the atrial system, but in some individuals, the heart beats irregularly, leading to an insufficient amount of blood reaching distant organs and tissue.

This can result from a rhythm disorder called atrial fibrillation—Afib—which is a type of arrhythmia. Afib can cause a stroke, and patients are often prescribed a daily aspirin dosage long-term to prevent such incidents. However, according to new research, this commonly prescribed regimen may not be as effective as previously thought.

Those with Afib are at an increased risk for blood clot development, and a low-dose aspirin regimen provides adequate anticoagulation to reduce the risk.

The abnormal rhythmic actions of the right side of the heart seen in Afib patients leads to the stagnation of blood in that chamber, which causes a clot. The clot then has the potential to travel through the atrial system before becoming lodged in vital organs such as the brain, leading to a stroke. While anyone can develop atrial fibrillation, it is more commonly seen in people who are 60 or older.

“When AF patients are considered low risk for stroke, physicians often treat them with aspirin rather than stronger anticoagulants to further lower that risk. What was unknown was if aspirin was a safe and effective stroke prevention treatment after an ablation in lower-risk AF patients,” said Jared Bunch, the study’s lead author and director of Heart Rhythm Research at the Intermountain Medical Center Heart Institute.

Giving aspirin to Afib patients has been a routine practice for many years, and the new data suggests that those treated with ablation therapy reach significantly lower levels of stroke risk without the use of aspirin.

Instead, aspirin increased the risk of gastrointestinal bleeding and genitourinary bleeding when compared to another commonly prescribed anticoagulant medication, called warfarin.

The use of aspirin has been a staple in preventive treatment and is considered healthy therapy to lower the risk of heart disease. The researchers stress that the many risks of over-utilizing this drug often go underappreciated, leading to further and potentially fatal complications. They hope that this new information can help doctors make more informed decisions when prescribing preventative medicine.