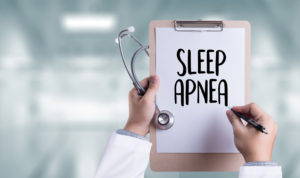 A poor night’s sleep can manifest itself in several ways. Brain fog, physical and mental fatigue, and slower memory recall are all nearly instantaneous following some missed shuteye.

But if you’re regularly experiencing poor sleep caused by sleep apnea, you could be at an increased risk for Alzheimer’s or dementia. That’s according to a new study published online in JAMA Neurology.

Sleep apnea, a condition that results in frequent bouts of interrupted breathing and micro-awakenings through the night, is already associated with heart disease and stroke risk.

It’s scary because you might not even know you have it. Although weight is most commonly associated with the condition, there are other risk factors.

Sleep apnea may contribute to Alzheimer’s by interrupting the flow of oxygen and blood to the brain. It may also prevent the brain from recharging. Uninterrupted sleep is required for the brain’s cleaning crew to get to work removing harmful amyloid proteins.

If you sleep alone, it is likely impossible to diagnose. Some potential signs you could have it include

If your sleeping partner says that you snore heavily and seem to gasp for air, it’s definitely possible.

But the only real way to tell is with a test.

Memory and brain function are inseparable from quality sleep. Sleep, in fact, is inseparable from health and chronic disease risk. If you’re not feeling well-rested despite believing you slept through the night, being tested for sleep apnea is recommended.

Even good sleep hygiene will not prevent sleep apnea. If you’re feeling like you’re not sleeping well and have ticked every box when it comes to readying yourself for good sleep, testing is recommended. Those seemingly common memory troubles could be signaling a more severe sleep-related problem.