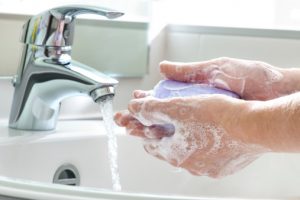 A research team from Korea University has determined that antibacterial soaps containing triclosan do not fight germs any better than plain soap.

In December, 2013, the FDA created a rule that soap manufacturers had to prove antibacterial soaps are more effective at fighting germs than regular soap.

Triclosan is an antimicrobial agent commonly found in antibacterial and antifungal products. It can be found in personal care products, toys, kitchenware and clothing to reduce or prevent contamination and growth of bacteria. Although triclosan has been proven to fight bacteria and germs, adverse effects have been documented through its use – allergies, endocrine disruptions and toxicity, to name a few.

For the study the research team compared two types of soap through in vitro and in-vivo experiments. The two soaps were exposed to 20 different bacterial strains and tested under conditions which replicated hand washing.

Both products contained the same ingredients with the exception of one containing 0.3 percent triclosan. Microbe exposure lasted for 20 seconds and water temperatures were 22 and 40 degrees Celsius which are recommended temperatures for soap.

In-vitro testing was conducted at 22 degrees Celsius, and in-vivo testing was completed at 40 degrees Celsius by volunteers. Volunteers washed their hands in accordance to guidelines set out by the World Health Organization – lather soap vigorously for 30 seconds, cover entire surface of hands and lower forearms and rinse.

Researchers have two reasons as to why the triclosan soap didn’t kill the bacteria more immediately or more effectively than plain soap:

1) Exposure was too short – 20 seconds is not long enough to fight germs.

2) The soaps contained detergents and surfactants which could reduce the effectiveness of triclosan.

The findings were published in the Journal of Antimicrobial Chemotherapy.