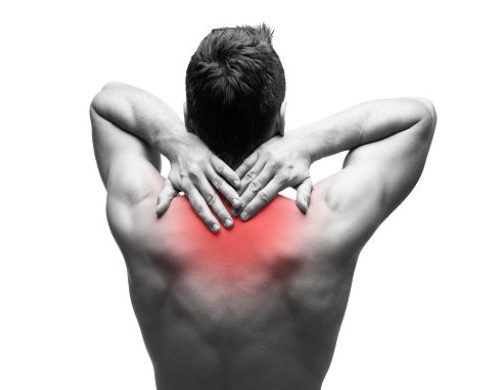 Trapezius muscle pain is often described as acute or chronic pain that affects a number of small muscles in the upper back and neck. The pain in this area typically begins and remains in the trapezius area.

Trapezius strains causing pain are thought to be due to repetitive strain or stress injuries, similar to what occurs when carrying light loads or having certain unnatural postures like being hunched over a computer keyboard for long hours. It is believed that trapezius muscle pain trigger points are the main cause of neck and upper back pain. Acute forms of injury like whiplash may also lead to trapezius muscle pain.

Anatomy of the trapezius muscle

The trapezius muscle can be further divided into three bands of muscle fibers, all of which have distinct structures and functions. They all work together to support the movement of the shoulder blade and the spine.

Superior fibers: Located on the posterior and lateral sides of the neck and function to elevate the shoulder blade, allowing us to perform movements like a shrug.

Middle fibers: Located along the superior thoracic vertebrae inserting into the acromion process of the scapula. The middle fibers work by retracting and adducting the shoulder blade, pulling it closer to the spine.

Pulled muscles: Occurs when a muscle has been moved too far and too quickly, resulting in injury. Because the connection between the muscles has been severed, pain and a decreased range of movement is a likely result.

Stress: Being stressed out can manifest to a point where your muscles tense up or become tightened, particularly in the trapezius muscles. This is primarily caused by excess muscle contraction, leading to muscle soreness and pain. These symptoms may be also compounded by mental strain and anxiety that often accompany stressful periods.

Bad posture: Sitting or standing improperly can lead to trapezius muscle pain among other kinds of problems involving the spinal vertebrae and support muscles. If bad posture is not corrected early on, it may become permanent.

Pressure: Heavy or tight pressure on the trapezius causing pressure on the muscle can lead to pain. This can be induced by wearing heavy backpacks, shoulder bags, or even tight bra straps.

Holding positions: Maintaining awkward standing or sitting positions can lead to muscle pain felt in the trapezius muscle. This may also be referred to as a repetitive stress injury.

Traumatic injury: Trapezius muscle pain can occur due to acute injuries such as whiplash or direct injury to the head. Your head being forcibly snapped backward then forwards strains the trapezius muscle.

Symptoms of a trapezius strain

The primary symptom experienced by trapezius strain sufferers is pain that can be felt in all areas of the back that the trapezius muscle innervates. Pain exacerbates when using the arms for any activity as they connect to the shoulder blade, leading to a decreased range of movement.

When seeing a doctor for your yet undiagnosed trapezius strain, they will ask you in detail where your pain is felt, what makes it worse, and what makes it better. This will give the doctor a better idea of where the pain may be located. A brief medical history and medication list will also be taken to rule out any underlying causes.

The most obvious reason for a trapezius strain is an injury of some sort, so it is important to tell your doctor if you play any sports or perform any task at work that could have led to your trapezius muscle pain symptoms.

Next will be the physical exam. Your doctor will inspect the area looking for any signs of bruising on the upper back, then ask you to move your arms and shoulders to see exactly how the trapezius muscle pain is produced and which areas of the upper back show tightness and tenderness. Other evaluations will assess cranial nerve function, including sensation of light touch and a pinprick. Muscle stretch reflexes and strength testing will also be measured.

If the progressing neck and shoulder pain is not accompanied by other signs and symptoms of an underlying medical condition, specific tests such as an MRI are not required.

Rest: Constantly putting stress on your muscles will make it difficult for the recovery process. Not taking the time to rest can worsen musculoskeletal pain.

Ice: This may be done by simply applying ice on the affected area to help reduce pain and swelling. Using an ice pack is ideal, but ice cubes in a towel or a bag of frozen vegetables will also do the trick. It is recommended to ice the affected part of the body for about 15 to 20 minutes every two to four hours.

Heat treatment: The warmth from hot showers or a heated towel can do wonders for easing muscle tension. This can also extend to wearing warm clothing during cold days if you are especially sensitive to temperature changes. Heat can also boost the healing process and reduce pain. Heat packs may also be utilized, which can be bought in store or be made from filling a small sock or pouch with rice and microwaving it for two minutes.

Epsom salt: A common item added to warm baths, Epsom salt can also help to relieve muscle pain. This is thanks to its high magnesium content that aids in the relaxation of muscles, aches, and pains. To get the best results, add one to two cups of Epsom salt to your bath and soak the affected joint or entire body for at least 30 minutes. It is recommended to take baths up to three times per week until your sore muscle has healed.

Activity modification: Limiting strenuous activities and getting an adequate amount of rest can help. Learning to keep better posture, like sitting with your back straight while at your desk or taking frequent breaks from sitting, can help relieve symptoms. A good rule of thumb is to make sure you can put your hand through the gap at your lower back when sitting or standing straight.

Pain medication: The use of non-steroidal anti-inflammatory drugs (NSAIDs) can be a useful add-on for further reducing pain and swelling. Common NSAIDs includes ibuprofen (Motrin, Advil), naproxen (Aleve), and several others that are prescription strength. It is important to follow the doctor’s directions when using these drugs as they also may have side effects.

Trapezius muscle strains are likely to result in the formation of tender knots or trigger points causing pain and discomfort but can be easily remedied by applying pressure through massage. It is advised to use good judgment when performing any kind of massage, not to press too hard. Areas of focus should be the shoulders, neck, and thoracic spinal areas. The following are some massage techniques you can try today:

Tennis ball: A firm object like a tennis ball can be placed between the trapezius and a hard surface, like the floor, and rolled back and forth. Focus on the area of pain while doing this type of massage.

Laying down: By simply laying on your side, you can help relax the trapezius muscle. It is recommended to keep a pillow under your head to support your neck and keep it in line with your spine. You may also reach back with your hand and knead the sore area with your fingers.

Use a massage tool: Many massage tools and devices exist to help you reach tough to get to areas like the back. Depending on your preference, you may prefer an electronic device for your trapezius muscle pain massage, but manual options might help just as well.

Like other muscles in the body, the trapezius can be stretched and exercised to help ease pain and stress. The following are some of the most effective exercises for trapezius muscle pain:

Shoulder shrug: Considered one of the most effective exercises to alleviate trapezius muscle pain, it can be performed by simply rising your shoulders toward your ears, tightening, and holding/releasing. You may also add dumbbells in each hand to increase the stretch.

Upright rows: Begin by standing with your feet shoulder-width apart and resting a pair of dumbbells in front of your thighs while you hold on to them. Now, raise the dumbbells up in front of you to shoulder level, then gently bring them back down.

Shoulder roll: Stand with your back straight and your feet shoulder-width apart, then begin to roll your shoulders up and then forward in a circular motion. Rotation should be performed in a slow and controlled fashion. You may also perform this exercise in reverse.

Yoga neck stretch: While standing straight with feet shoulder width apart and your arms at your sides, raise your right arm and push your head gently to the left side until you feel a stretch. Now repeat on the opposite side. Once both sides have been completed, place both hands on the back of your head and gently push forward, feeling a stretch in the neck and down the back. Hold each stretch for about 20 to 30 seconds before releasing.