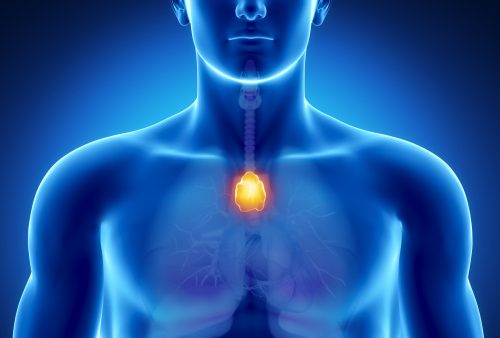 Life-threatening infections in older individuals can be due to a rapid shrinking of the thymus, according to researchers.

The thymus is a specialized gland of the immune system. It is located in between the sternum (the central bone of your chest) and the heart. The thymus is comprised of two identical lobes that produce T cells which boost your adaptive immune system, and helps your body adapt to foreign invaders. Unfortunately the thymus starts to shrink in the early teen years and the shrinking continues with age.

A study published August 6 in Cell Reports reveals that the shrinking of the thymus may be due a decline in its ability to protect against DNA damage from free radicals. Once the damage reaches a critical stage, the production of pathogen-fighting T cells slows down and ultimately dies out.

According to senior study author Howard Petrie of the Scripps Research Institute, as the thymus ages more rapidly than any other tissue in the body, the ability of older individuals and seniors to respond to new immunological challenges, is severely compromised. This limits their ability to adapt to newer pathogens, and the vaccines that offer protection against them.

What happens is, starting around the early teen years, the thymus rapidly decreases in size and loses its capacity to produce enough new T cells. This calls for existing T cells to duplicate. But these duplicated cells only recognize pathogens from previous or ongoing infections. As a result they cannot offer the immunity against new pathogens, and even fail to adapt to the protective immune responses elicited by new vaccines.

Until recently, the reasons for thymus atrophy were entirely speculative. The most common theory is that sex hormones play a key role in the atrophy, but this has not been corroborated by scientific evidence.

To find out the real cause of thymus shrinkage, scientists at the University of Texas Health Science Center at San Antonio, developed a strategy to analyze genetic activity in the thymus of lab mice.

The researchers found that the thymal cells were deficient in an antioxidant enzyme called catalase. Because of this there is an accumulation of tissue-destroying free radicals in the thymus.

To validate their theory, the researchers genetically increased the catalase levels in mice. After a few months, the size of the thymus of the genetically engineered mice was more than double that of normal mice.

These findings support the theory that free radicals are indeed the cause of shrinkage and aging in the thymus. These toxic molecules, form in the cells as a natural byproduct of the metabolism of oxygen. They have been linked to progressive atrophy in many organs and tissues as part of the normal aging process.

The difference is while in most organs and tissues, the atrophy is generally slow, and does not become apparent until late in life, in the case of the thymus, the atrophy is more rapid and destructive. The destruction, we now know is a result of catalase deficiency in the thymus.

Petrie said the extant of tissue atrophy in the thymus is directly proportional to the population of free radicals.

In future studies, the researchers will investigate whether antioxidant supplementation (to fight the free radicals) will improve the functioning of the thymus and the immune system during aging. If yes, than the studies could lead to the development of new clinical recommendations for the prevention or treatment of age-related thymus atrophy in humans.