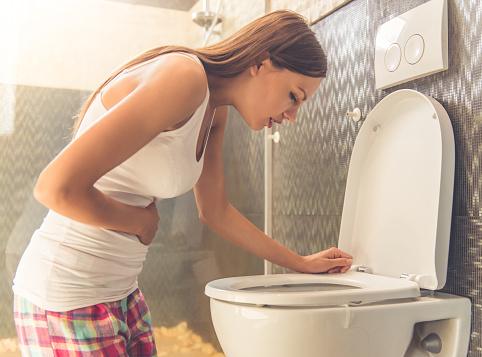 We have all vomited at one time or another, whether it was due to a long night out or a violent illness. We commonly look away in disgust from the newly expelled vomit, as it may induce more retching.

This may be a missed opportunity, however, as the appearance of your vomit can hold clues within its content, consistency, and color to help pinpoint the approximate reason for puking.

Bile is a digestive fluid used in the digestion of fats in the small intestine. Oftentimes, during fits of vomiting, bile may accompany the stomach content and appear dark green or even bright yellow. The identification of bile should not be ignored, especially if it appears suddenly, as it may indicate a serious complication that may require immediate medical attention. Bile secretion is greatest 20 to 40 minutes after eating an especially fatty meal, and if vomiting were to occur for any reason during this period, you can expect to see partially digested food mixed with digestive enzymes, mucus, and bile.

Causes of throwing up bile

There are a number of reasons why we might vomit bile. Excessive vomiting in itself can be the reason for seeing bile, but viruses and other causes of irritation are also common causes. The act of throwing up is a normal bodily response to some sort of disturbance in the digestive tract, with your body attempting to correct the abnormality by expelling it. The following are some reasons why a person may vomit bile.

How to stop throwing up bile?

Once vomiting has started, it is very hard to stop mid-episode, with the only option being to let it run its course. One of the most common reasons for vomiting bile is that your stomach is empty. It is typically the least worrying form of bile vomiting and can be easily prevented and remedied by using ginger—such as in tea—to help calm the stomach, as it contains natural anti-inflammatory properties proven to help reduce nausea and the frequency of vomiting.

Unfortunately, not all cases of vomiting can be treated so easily. The following are some other treatment methods:

Vomiting is a common problem that has prompted the use of home remedies to help combat it. The following are some of the best ways to stop throwing up bile:

The causes and treatments mentioned may help give you a better idea as to why you are experiencing bile vomiting, but not all cases can be handled alone. It is important to seek professional medical care if your vomiting is serious and impacting your overall health.

What causes throwing up yellow bile and how to stop it