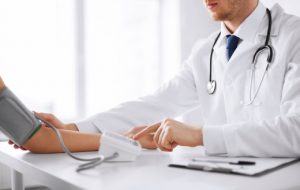 Individuals who experience “white coat syndrome” – high blood pressure in the presence of a doctor or medical office – have higher rates of heart and vascular disease. The findings were uncovered by UT Southwestern Medical Center.

Senior author, Dr. Wanpen Vongpatanasin, said, “Previous studies on white coat hypertension – blood pressure that is high in a medical setting but normal at home – have shown conflicting results, and many in the medical community have viewed it as a benign condition. But our research suggests that white coat hypertension is associated with an increase in heart and vascular disease.” The same findings were also discovered in those with “masked hypertension,” when a person has normal blood pressure with their doctor but it is high when they are at home.

Both white coat syndrome and masked hypertension were linked with cardiovascular events, even when results were adjusted for other risk factors that can lead to cardiovascular events, such as smoking and diabetes. Furthermore, both types of hypertension were associated with organ damage.
Additionally, masked hypertension was found to be more prevalent than previously believed. One in five patients were found to have high blood pressure at home but not near a doctor.

Dr. Vongpatanasin said, “Given the high prevalence of masked hypertension in this population, our study supports the routine use of home blood pressure monitoring for U.S. adults – both for those who are taking antihypertensive drugs as well as those who are not.”

Study contributor Dr. James de Lemos said, “These findings have important implications, and suggest that monitoring only in the physician’s office may not tell the full story about blood pressure and blood pressure control. Monitoring blood pressure in the home setting appears to identify a substantial number of individuals at risk for the long-term effects of hypertension who would have been missed had only the clinic blood pressure been considered.”

Dr. Vongpatanasin concluded, “Previous studies in Japan and Europe have shown a link between white coat hypertension and cardiovascular complications, but this is the first direct evidence of organ damage and increased cardiovascular problems in a U.S. population.”

The findings are published in the Journal of the American College of Cardiology.