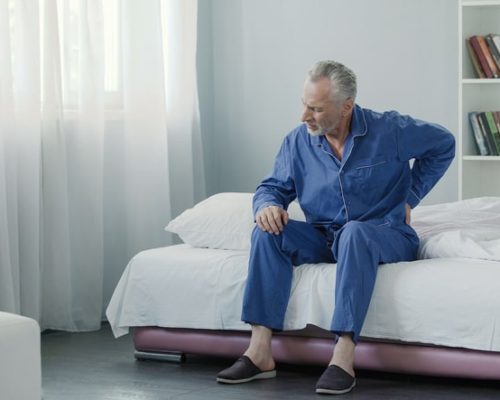 When you think of osteoporosis, you often think of women, but men can also develop this bone disease. In fact, men experience osteoporosis at higher rates than previous believed, yet it continues to be a condition that is overlooked and underrated.

Statistically, one in two women will experience osteoporosis, while among men, it is one in four.

One study that looked at 200 men found that 40 percent of patients over the age of 55 had low bone mass and nine percent had osteoporosis.

Osteoporosis is a silent condition, and many patients don’t even realize they have it until they experience a fracture. At that point, though, the bone mass loss can be quite serious.

Women are more routinely screened for osteoporosis than men, and most advice given regarding osteoporosis is geared towards women. A 2017 study found that men aged 36 to 55 who were questioned about their knowledge of osteoporosis had failing scores.

Yes, it is true that women are more susceptible to osteoporosis due to hormonal changes and having smaller bones than males. But that doesn’t mean that men should be left out of screening and conversations regarding osteoporosis.

Dr. Laura Ryan explained, “If a woman goes to the ER with a hip fracture, 49 percent of the time she will have some sort of follow-up with a doctor. Men’s likelihood of getting any sort of follow-up – to discuss the [possibility] of having osteoporosis, the need for bone density testing or medications – is less than five percent.”

Even studies on osteoporosis are largely conducted on women, those including treatment options and disease progression. Screening guidelines are also focused on women, so there is no standardized guideline for screening for men.

Even in checkups or physicals, men are less likely to have their bones scanned, regardless of their age, unless a problem is presented regarding their bones.

Risk factors for osteoporosis in men are similar to that in women – older age, family history of osteoporosis, long-term use of corticosteroids, having certain chronic diseases, lack of physical activity, insufficient vitamin D and calcium, smoking, and high alcohol consumption. Unique risk factors specific for men include low testosterone and the use of androgen deprivation therapy for prostate cancer.

If you fall into any of these categories or possess these risk factors, you should especially speak to your doctor regarding screening for osteoporosis.