Home » Anti-Aging » The surprising secret to a long healthy life… 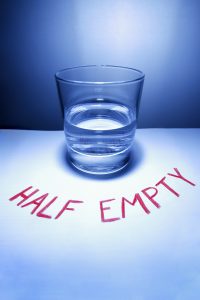 Remember the old song, “Always Look on the Bright Side of Life,” sung rather humorously in Monty Python’s Life of Brian? Well, maybe you should try looking on the dark side, too. That’s because pessimists live a little longer than optimists, a new study reveals.

Maybe we don’t always need a silver lining, after all.

German research, published in the journal Psychology and Aging, has discovered that pessimists, who generally tend to have lower expectations about the future, are less inclined to experience disease or disabilities and have longer lives on average than optimists. Researchers collected data taken between 1993 and 2003 by the national German Socio-Economic Panel, an annual survey of private households made up of roughly 40,000 people ages 18 to 96.

RELATED READING: Having this could save you from dying from heart disease

Is your glass half-empty?

During the annual survey, participants were asked to rate how happy they were with their lives and how satisfied they thought they would be in five years. After such time, the interviews were repeated. And all interviews were conducted in person.

Because life satisfaction commonly is associated with prosperity, researchers also considered factors like age, gender, personal loss, illness and medical treatment, as well as personal income. Unexpectedly, researchers learned that good health and income were closely associated with expecting a greater decline compared with those in poor health or with low incomes. In addition, they found that a higher income was related to a greater risk of developing a disability.

“Our findings revealed that being overly optimistic in predicting a better future was associated with a greater risk of disability and death within the following decade,” lead author Frieder R. Lang, of Germany’s University of Erlangen-Nuremberg told ZME Science. “Pessimism about the future may encourage people to live more carefully, taking health and safety precautions.”

RELATED READING: Why surfing the internet can make you happy

Be more realistic and live longer

Researchers say that these findings shed new light on how your perspective on life can either help or hinder your chances of leading a longer and healthier one.

Basically, your brain is a complex thing and there’s still so much that scientists don’t understand about it. But they know one thing for sure, for some people the brain tends to maintain a positive outlook on life, even through challenging and depressing times. It tends to do this simply by focusing on the positives while rejecting negative thoughts altogether.

Of course, always seeing the glass as half-empty doesn’t exactly make you a greater health risk. For instance, previous studies have shown that a sunnier outlook can help people feel better, especially when experiencing terminal disease. Still, the obvious downfall of being optimistic is the tendency to underestimate all of the risks.

So maybe looking at the dark side of life isn’t the worst idea in the world, within reason, of course.