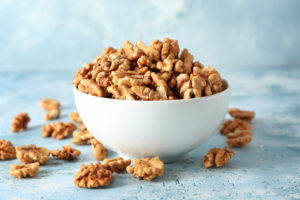 Most snacks aren’t doing anything for your health. In fact, most of them contribute to weight gain, poor gut health. And a host of associated problems.

But what are you supposed to do when hunger hits between meals and you’re craving that crunch? Some new research is saying it’s a good idea to reach for some walnuts.

Walnuts might do wonders for your gut and heart health. Nuts are already recognized as being a valuable healthy snack to boost energy and satiety. Walnuts in particular, however, might be the superior choice.

High in fiber, protein, omega-3 fats, calcium, and iron, walnuts have long been a darling of researchers and other members of the health community. A new study, however, wanted to see if they were useful in treating specific health conditions.

In a follow-up study to a 2019 experiment where researchers from Pennsylvania State University in State College found walnuts could lower blood pressure, researchers wanted a closer look. This time they decided to look at gut health.

Researchers used a randomized control trial featuring 42 overweight or obese participants between the ages of 30 and 65. The goal was to see how a daily serving of walnuts might influence gut health.

Each participant was required to follow their standard Western diet for the first two weeks. Then they were randomly assigned to one of three groups: A group that ate a daily serving of whole walnuts; one that a diet featuring alpha-linolenic (omega-3 believed to responsible for some of walnuts health benefits) in the same amount as the walnut group, a control group taking oleic acid.

Each eating program lasted six weeks and each participant went through one cycle of each. Fecal samples were examined to assess the effects on gut health.

It turned out that eating whole walnuts made a big difference in heart and gut health. They found that when participants ate a 3 ounce serving of walnuts per day they had more diverse, healthier gut bacteria.

Walnuts appeared to enrich gut bacteria populations, particularly those that have a history of health benefits. Some notable strains that were more populous among the nut eaters included Roseburia, Eubacteria eligens, and Butyricicoccus.

So next time you’re hungry, reach for a handful of walnuts to pick you up. A small serving each day might make a big impact on your overall health.