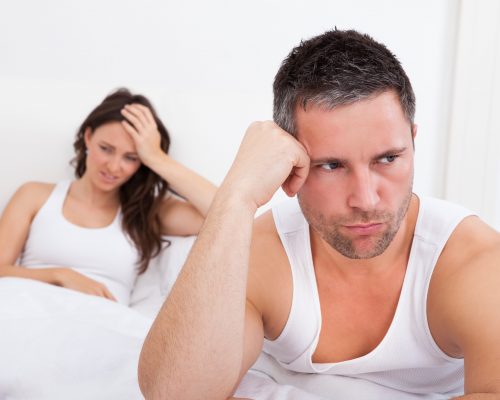 “Not tonight, honey. I have a headache.” If you’ve ever said those words, odds are you’re female. And you’re certainly not alone. For many couples, life under the sheets isn’t always ideal, no matter how hard you try to make it all work.

New research shows that pain makes a difference for the sex drive of women much more than it does for men.

Researchers at two Montreal Universities (McGill and Concordia) found that for female mice, pain and inflammation significantly reduced sexual motivation. But either relieving the pain or boosting sex drive with medication brought motivation levels back to normal. When looking at male mice, on the other hand, pain and inflammation had no effect on their desire for sex.

Related Reading: Improve your sex life with this one simple exercise

The study was published in the April issue of the Journal of Neuroscience. Mice were placed in a mating chamber that was divided, but with openings only big enough for the female mice to pass through. The male mice were too large for the openings. This put the decision to mix with the male mice in the female mice’s court. For a second part of the experiment, male mice were placed in a mating chamber where they had access to a female mouse in heat.

During the experiment, the researchers found that female mice experiencing inflammatory pain spent less time with a male partner, which meant there was less sexual activity between the mice. However, when the male mice experienced similar pain, there was no change in sexual behavior. Female mice that were treated with either a pain reliever or one of two drugs to boost sexual desire went back to normal levels of sexual activity.

From mice to men (and women)

The findings of this research could have an effect on the sexual health of more than just mice. “We know from other studies that women’s sexual desire is far more dependent on context than men’s, but whether this is due to biological or social/cultural factors, such as upbringing and media influence, isn’t known,” says Jeffrey Mogil, a McGill University professor and study co-author.

“Our finding that female mice, too, show pain-inhibited sexual desire suggests there may be an evolutionary biology explanation for these effects in humans and not simply a sociocultural one.”

It could also shed some light on the effects of chronic pain on sexual health. Intimacy, including sexual intimacy, is an important part of health – and a driver for marital harmony, so it deserves our attention when things are not rolling along as smoothly or as often as they should.

Researchers from the University of Chicago’s Center on Demography and Economics of Aging in Illinois established a clear link between sexual health in older couples and warding off illness. According to the analysis, published in the Journals of Gerontology: Series B in January, sexual intimacy is the link that keeps partners positive about their marriages in the face of difficult times, and a lack of sex makes matters worse. Couples in the study reported an average of one partnered sexual activity per month. As sexual frequency increased, so did marriage quality. In other words, frequency counts in so many ways.

Keep the lines of communication open

Chronic pain can have obvious effects on mobility and physical health as well as sex drive and mental health as a result. What should you do when that kind of pain has limited your physical and mental appetite for sex?

See your doctor about pain-management options and possible sexual side effects of medication. People should also consider counseling, either for yourself to deal with the mental effects of living with chronic pain, or for your relationship.

Most important, talk to your partner in order to reduce stress and open the lines of communication. You want a steamy love life for years to come – pain should simply not be getting in the way of that intimacy!