Home » Healthy Eating » The Effect of Mental Images On Cravings 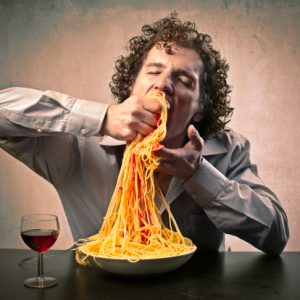 One of the major issues that needs to be addressed in losing weight is controlling cravings, especially that of junk food.  We all know that weight gain is strongly associated with the consumption of high-calorie food items, coupled with the low amount of energy utilized in daily activities.  This imbalance in the caloric input-output primarily results in weight gain, as well as increases the risk in developing various medical conditions such as diabetes, hypertension, and even cancer. But have you ever thought about what those mental images really do to your appetite?

An Interesting Study on Food Cravings

Although various approach to losing weight are currently recognized, some people still struggle with cravings for certain junk food.  It is possible that these particular food items have a long history with this individual; cravings for chocolates or ice cream may thus be due to its role as comfort food.

According to a recent medical report, mental images of food items could actually control one’s cravings and potentially serve as an additional approach to the prevention of weight gain.  Using a study population of 100 adults, half of the subjects were shown images of either 300 ml or 500 ml of soup.  Minutes later, the study participants were given the opposite amount of soup that was shown to them.

The Reaction of Mental Images

Of course, those individuals who received the smaller amount of soup reported hunger after consuming the soup.  However, three hours after the experiment, these same individuals were again given the same amount of soup they received earlier, yet did not complain of hunger or any form of cravings.  For the group that was shown a bigger bowl of soup but actually received a smaller amount, these individuals easily achieved satiety, with most of them not finishing the entire serving of soup.

The Study Findings and the Mental Image Theory

The findings of this study showed that there was a huge difference between “perceived” soup and the “actual” soup provided.  It appears that initially, an individual would notice that the amount of soup they received was not the same as what they see in the images.  However, the time interval between the first and the second serving of soup apparently trained the study participant to process the information from the images and thus their cravings or hunger pangs subsided.

This recent medical report serves as the first account on the manipulation of cravings in food consumption.  The authors of the study feel that this form of episodic memory may actually help curb cravings in those who struggle with issues of weight gain.  The findings of the study is a total opposite of the saying “out of sight, out of mind”, in which we would think that the absence of junk food and other sumptuous food items would help in controlling our cravings.

The authors of the report also explained the possible mechanism behind this mental control of hunger and cravings.  They said that this psychological mechanism might be similar to amnesia, in which an individual may be standing in front of a loved one yet does not recognize who that person is.  In terms of hunger and satiation, training the mind through the use of actual images may also decrease the desire to consume certain food items, especially junk food, which is strongly implicated with weight problems.  This mental training may also help in reducing caloric intake, increasing the chances of weight loss.