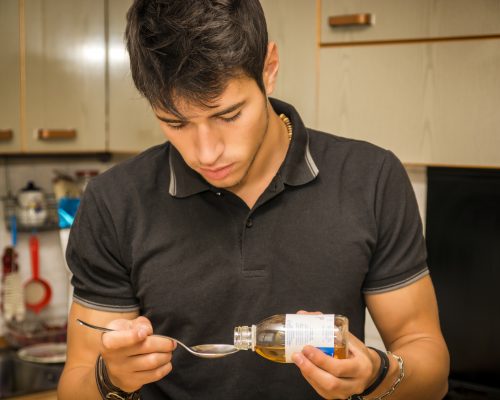 Many of us take liquid medications either with a teaspoon or table spoon but a new study has found this contributes to dosage errors. The findings of the study have offered suggestions that rather than using teaspoon or tablespoon as measurements, dosages be changed to milliliters.

Previous research on the topic found that by using teaspoons individuals’ under-dose by 8.4 percent and when they use tablespoons they overdose by 11.6 percent.

Authors Koert van Ittersum, PhD and Brian Wansink, PhD, suggest that by indicating dosage measurements in milliliters people will opt for proper measuring devices as milliliters are difficult to estimate or eye-ball.
The study included 177 young adults where 34.5 percent of them indicated using kitchen spoons and utensils as a means to administer medication. The researchers found that when dosages were given in teaspoons, 60.9 percent of participants used a teaspoon and none of them used a milliliter measuring cup. When dosages were given in milliliters both the teaspoon and the measuring cup were equally used. The researchers found that by indicating dosages in milliliters it reduces improper dosages by 50 percent.

Koert van Ittersum said, “When measuring medicine for ourselves or our children, we often use regular kitchen spoons but they are not accurate measuring instruments. While we feel that we can estimate teaspoon doses, milliliters are much harder to estimate visually, therefore people are more likely to use accurate measuring spoons or cups when given dosage information in milliliters.”

The take away message here is not only should the FDA and pharmaceutical companies move away from recommending dosages in teaspoons but the general population, too, should start measuring their medications rather than guessing them.