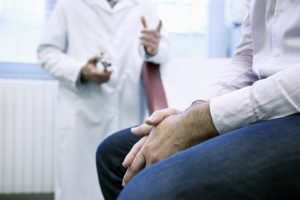 If you are a man trying to have a child with your partner and planning for the future, you’re probably reasonably healthy at the moment. You may even be in peak mental shape.

But if you’re a guy experiencing fertility “challenges,” you now need to concern yourself with the chance of an early death.

In a recent study led by Stanford University School of Medicine, researchers found that males who are infertile because of defects in their semen are more at risk of early death than those with normal semen. In fact, men who showed two or more abnormalities in their semen were more than twice as likely to die over an eight-year period, compared to those who had normal semen.

Actually, the greater the number of abnormalities, the higher the mortality rate, according to the study, entitled “Semen quality, infertility and mortality in the USA.” It was published in Human Reproduction in May.

RELATED READING: The real reason your spouse is not in the mood tonight

As early as 1989, researchers looked at nearly 12,000 males between the ages of 20 and 50 who were all considered infertile. Using data from the National Death Index and the Social Security Death Index, they were able to monitor participants’ mortality with better than 90 percent accuracy. Of the men who were followed, 69 died during the necessary follow-up period, which researchers considered a relatively low number. Researchers say they feel the numbers in the study are reflective of the fact men who get evaluated for infertility tend to have a higher-than-average socioeconomic status and as a result, far better diets, education and access to health care.

Usually, both smoking and diabetes, which double mortality risk, receive plenty of attention, says the study’s lead author, Michael Eisenberg. He’s the assistant professor of urology and Stanford’s director of male reproductive medicine and surgery. “But here we’re seeing the same doubled risk with male infertility, which is relatively understudied.” Eisenberg added that it’s possible that infertility may be caused by general health problems, too.

In many developed countries, infertility is a common enough medical complaint. Nearly one in seven couples will become affected. But Stanford’s study is only the third study to closely look at the connection between male infertility and mortality. The two others, one in Denmark and one in Germany, had conflicting information so more research is definitely needed.

RELATED READING: Is life getting in the way of your sex life?

It’s also possible that cholesterol levels have something to do with it, though, according to an investigation published in the Journal of Clinical Endocrinology & Metabolism. This study, called, “Lipid Concentrations and Couple Fecundity,” involved more than 500 couples, 18- to 40-years-old, from 16 counties across Michigan and Texas. It revealed that higher levels of total cholesterol and free cholesterol are linked to lower quality semen.

High low-density lipoprotein (LDL) or “bad cholesterol,” is considered to be a silent condition because it comes with no signs or symptoms. It affects around 71 million Americans, according to the Centers for Disease Control and Prevention (CDC).

And the fact that one in three children in the U.S. has high cholesterol today places a question mark on the future of fertility in North America unless certain lifestyle changes are made soon.

A cautionary tale for the health of generations to come.