Home » Health News » Sunscreen: What You Need to Know about Protecting Yourself from UV Rays 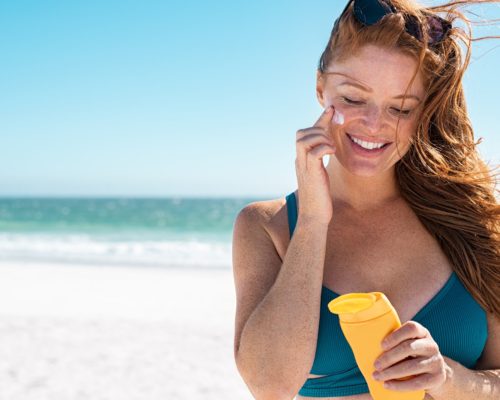 Some new data may have you wary about applying sunscreen. With summer right around the corner, what should you do?

Research published in The Journal of the American Medical Association is showing that chemicals in sunscreen leach into the bloodstream. This may not come as a major shock, however, they were found to remain in the body for a 24-hour period following use.

The study was conducted under the umbrella of the U.S. Food and Drug Administration (FDA), and noted that four chemicals in particular—avobenzone, oxybenzone, ecamsule, and octocrylene—need to be tested by manufacturers before achieving GRAS (generally regarded as safe) status.

One of those ingredients, oxybenzone, has been associated with hormonal disturbances in young men and has subsequently been removed from European sunscreens. But does all this mean you should avoid lathering up and hit those UV rays head on?

It does not. After all, we already know the sun can lead to cancer. These other compounds? Well, we’re not really sure. Another interesting fact is the participants in the study applied sunscreen to 75 percent of their body, four times for four straight days. One researcher said this was twice the rate the scientific community considers “real world” conditions.

Other studies have shown that sunscreen, when application directions are followed, is non-toxic. So, let’s say that for now, you should keep applying sunscreen when outdoors to block out harmful UV rays. But what should you buy?

Purchasing sunscreen can be a little confusing. With SPF 15, 30, 50, and 100 available, it’s hard to know which is the one to get. Further, these numbers can be a little misleading.

SPF stands for sun protection factor, and the numbers do not tell the whole story. For example, SPF 30 blocks 97 percent of the sun’s rays. SPF 50 blocks 98 percent. And according to the FDA and pharmacists alike, that one-percent does not make much of a difference. And SPF 100? It does not block 100 percent of UV rays. It means it does a better job at blocking UVAs, which do not lead to skin cancer. That said, if you have a history of skin cancer, SPF 100 might be worthwhile.

To keep your skin safe, apply sunscreen if you’re heading out into the sun. Put it on every couple of hours and look for varieties that don’t have oxybenzone—there are plenty of them.