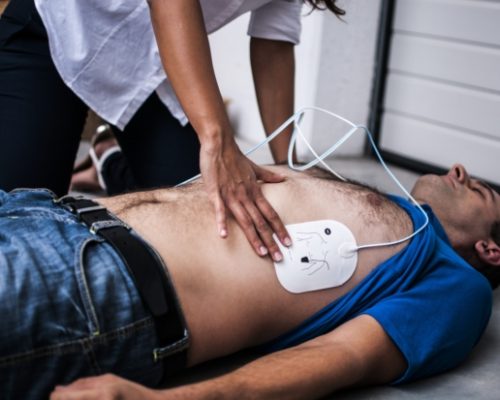 In case of a sudden cardiac arrest, immediate medical attention is required, or else chances of survival become quite slim.

Arrhythmia (ventricular fibrillation): An arrhythmia is an irregular heart beat, which is often caused by problems in the electrical system of the heart.

Inherited disorders: Arrhythmia, for example, may run in families. This can be a result of an inherited long QT syndrome, which is a disorder of the heart’s electrical activity.

Heart attack: A heart attack can trigger ventricular fibrillation and sudden cardiac arrest. Heart attacks can also leave behind scar tissue, which can make it difficult for electrical pulses to travel, resulting in heart rhythm abnormalities.

Enlarged heart (cardiomyopathy): When the heart muscle stretches or enlarges, one may develop damaged tissue and potential arrhythmias.

Valvular heart disease: The heart muscle stretches or thickens if the valves leak or are narrow. This increases the risk of heart arrhythmias and, hence, the risk of a sudden cardiac arrest.

If you experience frequent bouts of chest pain or dizziness, heart palpitations, shortness of breath, fainting or near fainting, or lightheadedness, you should see your doctor right away. You should also work on managing your modifiable risk factors in order to reduce your risk of sudden cardiac arrest.