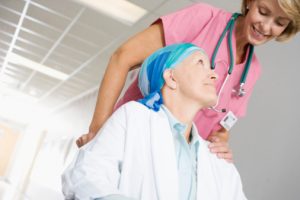 Copying success is a healthy habit, as was demonstrated by oncologists in a recent study. The success model these researchers copied was non-invasive Stereotactic Body Radiation Therapy (SBRT). This non-invasive therapy delivers a hi-dose of radiation that targets tumors in a precise way, thus minimizing the effect of radiation on the adjacent healthy tissue.

Traditionally SBRT is well-tolerated by patients and is effective in the early stages of lung cancer, where patients have inoperable lung cancer tumors that are smaller than 3-cm but have not spread out of the chest or even to the lymph nodes. Typically SBRT is not used for treating large tumors.

Before this study, weak patients who were medically compromised and had node-negative inoperable non-small tumors larger than 5-cm were often blasted with strong beams of radiation therapy.  However, this method was not exceedingly effective as the risk of recurrence was high and it also had nasty side effects.

For the study, the researchers wanted to test SBRT for the treatment of frail patients with large inoperable lung tumors and without lymph node involvement.

In their retrospective study, the team analyzed the results of 40 patients (with primary tumors greater than 5-cm) who were subjected to SBRT between December, 2003 and June, 2014.

The researchers studied the results 18 months after treatment and found:

Of course, while there were side effects of SBRT, including mild pain in the chest wall and some inflammation in lung tissue, 70.5 percent of the patients were free of side effects. Among the patients with side effects, two reported excessive fluid retention and lung inflammation, which resulted in blocked airways and a lung collapse.

According to Gregory M. M. Videtic, MD, CM, FRCP, from the Department of Radiation Oncology at the Cleveland Clinic Taussig Cancer Institute and professor of medicine at the Cleveland Clinic Lerner College of Medicine of Case Western Reserve University, lung SBRT is a good option for treating medically inoperable node-negative non-small cell lung cancer tumors larger than 5-cm.  The studies prove that with the selection of suitable patients, SBRT is safe and effective for treating larger tumors.

Even though this is a retrospective study and was done only over an 18 month period and with a small number of patients, the results look promising and will pave the way for further studies.

The details of the study are published in the International Journal of Radiation Oncology Biology Physics.