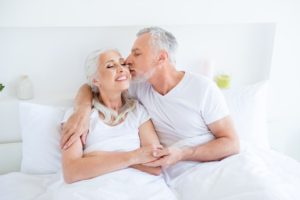 Estimates suggest that roughly one-million Americans will be living with Parkinson’s by 2020. A new study is showing that some people, however, may slow the progression of the disease and limit symptoms with a healthy sex life.

The two-year study published in the European Journal of Neurology found that men who had an active sex life were able to slow the progression of Parkinson’s disease and delay major symptoms.

Prior research has linked a close relationship between sexual health and general health in both healthy individuals and those with chronic disease. This new work is unique in the fact that it looked specifically at individuals with a Parkinson’s diagnosis.

Looking at 355 Parkinson’s patients (238 men and 117 women), researchers found that sexually active males in the early stages of the disease experienced “milder” disease progression. They also had less dramatic loss of motor skills and other symptoms compared to those who were not sexually active.

Researchers aren’t entirely sure why the effects occurred in men suffering from the neurodegenerative disease and not women, but it might have something to do with the fact that male participants outnumbered female two to one.

There is currently no cure or prevention techniques for Parkinson’s disease, and symptoms are very difficult to treat. The debilitating symptoms of the condition include:

Anything a person can do to keep symptoms from worsening, and delaying onset is very exciting. Of course, much more work needs to be done to say whether more sex does have notable benefits for Parkinson’s patients.

Even if you don’t have Parkinson’s, more sex can be a good thing. Some of the other noted benefits of sex may include: