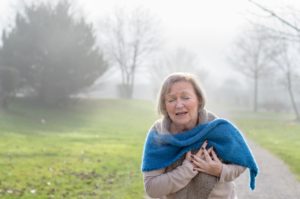 A brand-new study published in the European Heart Journal highlights some major gender discrepancies in the effects of cardiac arrest. And it seems like the best way to close the gap is with public awareness.

The study indicated that women were less likely to be identified as suffering from cardiac arrest, were given immediate treatment—CPR or defibrillator—on fewer instances than men, have a smaller window for treatment, and were more likely to die from cardiac arrest than their male counterparts.

This news isn’t just concerning for women, but society as a whole. Cardiologist and one of the authors of the study Dr. Hanno Tan told CBC News that “A policy solution lies in increasing awareness among citizens.” He continued with, “If a woman drops down, it’s not necessarily that she has fainted. It could also be sudden cardiac arrest. I think that is a very important message.” Identifying if she is breathing or not—if there is no breath, it is likely cardiac arrest.

Cardiac arrest differs from a heart attack in the sense that it is the result of an irregular chaotic heartbeat caused by electrical impulses in the heart. The heart then ceases to pump. A heart attack, on the other hand, is generally caused by a blocked coronary artery.

In addition to not realizing what might have happened, there could be other influencing factors behind the numbers. One could be that more elderly women live alone than elderly men, while another may be that women don’t recognize the urgency of the symptoms.

About a quarter of the people who experience cardiac arrest also experience a heart attack, yet symptoms for men and women are quite different. Men experience the symptoms you see on TV—sweating and clutching the heart. Women, however, will experience symptoms like fatigue, pain, light-headedness, nausea, or vomiting. Being aware of this difference is very important for identifying a heart attack.

It’s important for men and women alike to recognize these differences so they can act when needed. Learning CPR or keeping a defibrillator at home can be useful so you can help someone in need if they collapse in front of you. If you are a woman living alone, wearing a device that sends an alarm if symptoms are present may improve health outcomes as well.