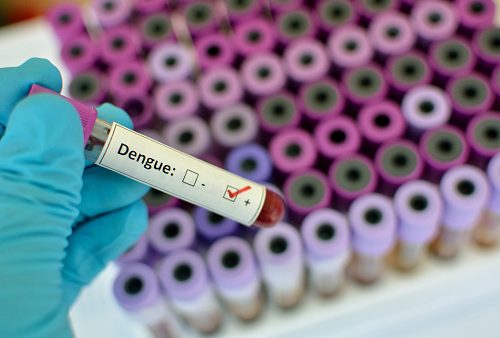 Researchers battling the deadly dengue fever have isolated the structure of a human antibody that can fight the (so far) invincible virus.

Researchers at Vanderbilt University and the National University of Singapore found that a structure of the monoclonal antibody overcomes and negates the effect of the potentially lethal dengue virus. The studies were done in mice.

The finding could lead to the first effective therapies and vaccines against the mosquito-borne virus that infects nearly 400-million people annually, and is one of the leading causes of death in some tropical countries.

What makes dengue so challenging, and so dangerous, is that there are four “serotypes” of dengue, or variations of the virus. And antibodies generated to fight one serotype do not protect against the others. Sometimes, if the patient is infected with a second variation years later, the antibodies used to combat the first serotype will make it easier for dengue to take hold. The process is known as antibody-dependent enhancement (ADE) of infection.

These kind of sequential infections can increase the risk for the more severe dengue hemorrhagic fever and dengue shock syndrome. The symptoms include fever, vomiting, internal bleeding and even fatal circulatory collapse.

In the current study, the researchers froze samples at very low temperatures so they could visualize antibody-antigen binding almost down to the atomic level. This method helped them identify a human monoclonal antibody against dengue virus type 2 (DENV2).

This prevented the virus from fusing to its target cell in the mice, thus preventing infection.

The research was published in the journal Science.