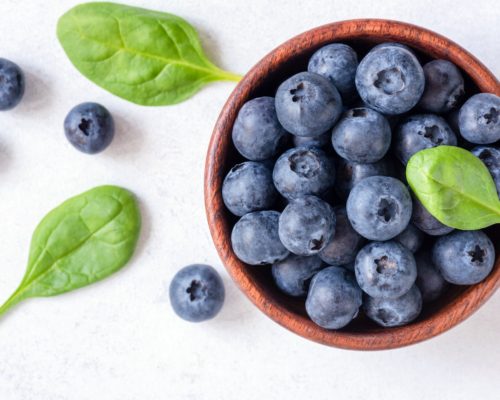 The health benefits of blueberries keep adding up. They are absolute nutritional powerhouses that pack a major punch to promote health in a number of ways. And a new study is showing that eating just one cup per day may lower the risk for cardiovascular disease by up to 15-percent.

The association between blueberries and a healthier heart and lower risk for type-2 diabetes is nothing new. But this new research, conducted by teams from the University of East Anglia in the UK and Harvard, show blueberries can reduce the risk for people at high risk for these conditions.

They looked at 115 people ages 50–75 that were either overweight or obese and had metabolic syndrome. Metabolic syndrome is a precursor to type-2 diabetes and marked by high blood pressure, excess body fat around the waist, high cholesterol triglycerides, and elevated blood sugar.

The study ran for six weeks and participants were divided into three groups:

Researchers noted that eating one cup per day reduced arterial stiffness and improved vascular function, which can independently lower the risk of cardiovascular disease by between 12 and 15-percent. They did note, however, that blueberry consumption did not influence blood pressure or do anything to improve insulin sensitivity. Further, no other dietary interventions were made.

It’s likely the benefits of blueberries come from antioxidants called anthocyanins, which are what provide the deep purple, red, or black in a host of fruits. These flavonoids may help reduce oxidative stress and inflammation in the arteries, allowing them to relax. These compounds, along with fiber, may also help improve cholesterol levels.

If you can eat a cup of blueberries per day, it may have some benefit to heart health. Of course, the benefits will likely be more pronounced if included in part of a healthy balanced diet than a pro-inflammatory diet.