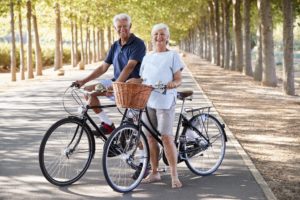 It is easy to have a fatalistic view of disease. This is especially true for dementia or Alzheimer’s, which have become almost synonymous with aging. Moreover, doctors have unconverted certain genes associated with a higher risk for these diseases.

But a new study is showing that genetics don’t necessarily predetermine Alzheimer’s and dementia. It found that if you are predisposed to the conditions, the benefits of a healthy lifestyle might outweigh genetics to lower the risk, while potentially preventing or delaying onset. In other words, no matter who you are, dementia and Alzheimer’s are not inevitable.

The research, appearing in the Journal of the American Medical Association (JAMA), indicates that abstaining from smoking, being physically active, moderate drinking, and a healthful diet can reduce the risk of Alzheimer’s and dementia, even in people in genetically predisposed individuals. Each one of those factors can reduce the risk, with the lowest risks associated with those who observe each of them.

The study looked at over 196,000 participants of European ancestry. Each was aged 60 or older at the outset and none had Alzheimer’s or dementia. They answered lifestyle questions throughout the trial period and underwent genetic testing. It’s likely the results would apply to people of all backgrounds.

About 1,769 dementia cases occurred during the follow-up period, but that lifestyle was more of a deciding factor. Researchers found that when genetically predisposed individuals lived healthy lifestyles, the incidence of dementia went down.

Even if a parent and sibling has been diagnosed with a form of cognitive decline, or your doctor has seen you have the genetics for it, do not lose hope. You can, in effect, control your destiny. Including at least 30-minutes of exercise into your day, spending more time moving, eating a diet with a variety of colorful plant-based foods, and drinking moderately or to celebrate special occasions all seem to play important roles in dementia risk and have the potential to cancel out genetic risk factors.