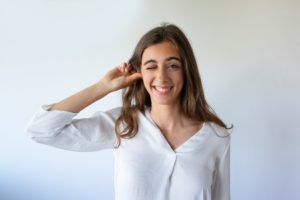 Could you imagine if stimulating certain points on your ear could lead to better sleep, improved mood, and a lower chance of age-related illness like heart disease and high blood pressure? According to some new research, it could be that easy.

A study published in the journal Aging showed that “tickling” certain areas of the ear could stimulate the vagus nerve and rebalance the autonomic nervous system, offering the potential to prevent age-related health conditions.

Part of the vagus nerve extends to the outer ear and is very easy to access. For the study, researchers delivered small electrical stimuli to the nerve through the outer ear. They did three separate studies on a total of 94 people, each lasting two weeks. The findings indicated that the therapy boosted parasympathetic nervous system activity and reduced sympathetic nervous system activity, creating a better balance in the autonomic nervous system. The result was lower inflammation, better sleep, and improved quality of life.

The researchers believe their findings may play a significant role in hindering the development of a host of diseases associated with aging. They describe the results as “the tip of the iceberg” and believe this non-intrusive therapy could promote healthful aging in several ways.

Because research is in its infancy, much more work needs to be done and practice methods need to be established. In the meantime, keep up with your other anti-aging efforts like a healthful diet and plenty of activity.