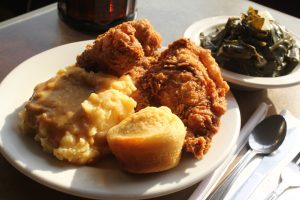 Stroke and chronic kidney disease risk increases with Southern-style diet of processed meats and friend foods. The Southern diet is characterized by fried and fatty foods, which by now we know can contribute to poor heart health. Researchers from the University of Alabama examined data from over 17,000 individuals over the age of 45 residing all over America and having no prior history of heart disease. They were asked to fill out food frequency questionnaires and undergo a physical exam. Over the course of six years, researchers checked in with each participant to document cases of heart disease.

Researchers noted five emerging eating patterns based on the data.

Those who reported following primarily the Southern diet had a 56 percent higher risk of developing heart disease. Southern dieters were even more likely to have hypertension, diabetes, and fat in the blood. Even when results were adjusted for income, age, and gender, the association between the Southern diet and poor heart function remained.

The typical individual consuming the Southern diet most was African American, brought in an income of $20,000 or less, did not graduate from high school, over the age of 65, and resided in what is commonly referred to as the “stroke belt” (North Carolina, South Carolina, Georgia, Tennessee, Alabama, Mississippi, Arkansas, and Louisiana).

The Southern diet is also high in sodium and trans fats and can lead to insulin resistance – all contributors to poor heart health.

An alternative study found that in chronic kidney disease, consuming fried foods and sugar-sweetened beverages raises mortality risk. The researchers identified 3,972 participants with stage 3 to 5 chronic kidney disease who had not started dialysis. The researchers then analyzed the diets of these participants and found that those who ate a Southern-style diet had a 50 percent higher risk of mortality over the 6.5-year follow-up.

Lead author Orlando Gutiérrez explained, “This adds to the evidence that suggests that the foods that they eat can meaningfully impact long-term survival in individuals with kidney disease. For clinicians, this suggests that focusing on modifying general patterns of foods that people eat, instead of individual components of the foods like salt intake or fat intake, may be more helpful in counseling patients. It may be more helpful to focus on general patterns of eating instead of individual nutrients since this may be easier for patients to conceptualize and therefore actualize.”

Although the researchers found that a healthy diet did improve survival rates, there was no indication that it slowed down the rate of progression of chronic kidney disease.

“We did not find an association of either a Southern-style diet or a fruits and vegetable diet with risk of developing end-stage renal disease, though this may have been because we were underpowered to detect any relatively modest effect,” Gutiérrez added.

The researchers suggest that following a Southern-style diet may also be an indicator of other poor lifestyle habits that can further negatively impact health. 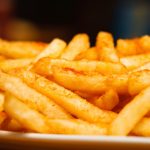 A large-scale study looked at the relationship between food and stroke risk. The Southern diet was described as consumption of fried chicken, fried fish, fried potatoes, bacon, ham, liver and gizzards, and sugary drinks such as sweet tea. This type of diet is characterized by high salt and fat intake.

Majority of the people consuming a Southern diet live in the southern areas of the U.S., but no matter where you live, eating the foods commonly found in the Southern diet regularly can pose serious health risks to your heart and kidneys.